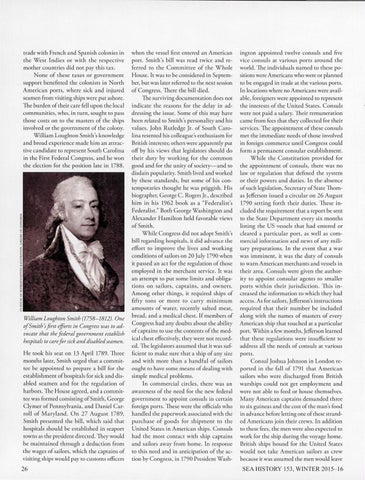 trade wi th French and Spanish colonies in the W es t Indies or w ith the respec tive mo ther countries did not pay this tax. None of these taxes or government support benefitted the colonists in North A m erican ports, where sick and injured seamen from visiting ships were put as hore. The burden of their care fell upo n the local communities, who, in turn, sought to pass those costs on to the m as ters of the ships involved or the government of the colony. William Loughton Smith 's knowledge and broad experience m ade him an attractive candidate to represent South Carolina in the First Federal C ongress, and he won the election fo r the position late in 1788.

William Loughton Smith (1758-1812). One of Smith's first efforts in Congress was to advocate that the federal government establish hospitals to care for sick and disabled seamen. H e took his seat on 13 April 1789. Three m onths later, Sm ith urged that a committee be appointed to prepare a bill fo r the establishment of hospitals for sick and disabled seam en a nd for the regulation of harbors. The H ouse agreed, and a committee was fo rmed consisting of Smith, George C lymer of Pennsylva nia, and D aniel Carro ll of Maryland. On 27 A ug ust 1789, Smi th presented the bill, which said that hospitals should be established in seapo rt towns as the president directed . They wo uld be m aintained thro ugh a deduction from the wages of sailors, which the captains of visiting ships would pay to customs officers

when the vessel fi rst entered an A merican port. Smith 's bill was read twice a nd referred ro the Committee of the W hole H ouse. It was to be considered in September, but was later referred to the next session of C ongress. There the bill died. The surviving documentation does not indicate the reasons fo r the delay in add ressing the issue. Some of th is may have been related to Smith 's personality and his values. John Rutledge Jr. of South Ca rolina resented his colleague's enthusiasm for British interes ts; others we re apparently put off by his views that legislators should do their duty by working for the common good and fo r the unity of society-a nd to disdain popularity. Smith lived and wo rked by these standards, but some of his contemporaries thought he was priggish . His biographer, George C. Rogers Jr., described him in his 1962 book as a "Federalist's Federalist." Both Geo rge Washington and Alexander H amilton held favora ble views of Smith. While Congress did not adopt Sm ith's bill regarding hospiLals, it did adva nce the effort to improve the lives and working conditions of sailors on 20 July 179 0 when it passed an act for the regulation of those employed in the merchant service. It was an attempt to put some limits and obligatio ns on sailo rs, captains, and own ers. Among other thi ngs, it required ships of fift y rons o r m ore ro carry minimum am o unts of water, recently salted m eat, bread, and a medical chest. If m embers of Congress had a ny doubts about the ability of captains to use the contents of the medical chest effectively, they were not recorded . The legislato rs ass umed that it was sufficient to m ake su re that a ship of any size and with more than a h and ful of sailors ought to h ave some m eans of dealing with simple medical problem s. In commercial circles, there was an awareness of the need for t he new federal government to appoint consul s in certain fo reign pons . These we re the officials who handled the paperwork associated with the p urch ase of goods fo r shi pm ent ro the U nited States in A merican ships. Consuls had the most contact with ship captains and sa ilors away from hom e. In response to this need and in anticipation of the action by C ongress, in 179 0 President Wash-

ingron appointed twelve consuls and five vice co nsuls at va rio us p orts aro und the world. The individuals named to these positions were Americans who were or pl anned to be engaged in trade at the various ports. In locations where no Americans were available, fo reigners were appointed to represent the interests of the United States. Consuls were not paid a salary. Their remuneration cam e fro m fees that they collected fo r their services. The appointment of these consuls met the immediate needs of those involved in fo reign commerce until Congress could fo rm a perm a nent consular establishment. W hile the Constitution prov ided fo r the appointment of consuls, there was no law or regulation that defined the system or t hei r powers and duties. In the absence of such legislation, Secretary of State Thomas Jefferson issued a circula r on 26 August 1790 setting fo rth their duties . These included the requirement that a report be sent to the State D epartment every six months listing the US vessels that h ad entered or cleared a particular port, as well as commercial informatio n and news of any n1ilitary preparations. In the event that a wa r was immi nent, it was the duty of consuls to wa rn American merchants and vessels in their a rea . Consuls were given the autho rity to appoint consula r age nts to sm aller ports w ithin their jurisdiction . This increased the info rmation to which they had access. As fo r sailors, Jefferson's instructions required th at their number be included along with the nam es of m as ters of every American ship that to uched at a particul ar port. W ithi n a few momhs, Jefferson learned that these regulations were insufficient to address all the needs of consuls at va rious ports. Consul Joshua Johnson in London reported in the fa ll of 1791 that A m erican sailors who were disch arged from British warships could not get employm ent and were not able to feed or house themselves . Ma ny Am erican captains dem anded three to six guineas and the cost of the man's foo d in advance before letting one of these stranded Am ericans join their crews. In addition to these fees, the men were also expected to wo rk fo r the ship during the voyage hom e. Bri tish ships bound fo r the United States wo uld no t rake A m erican sailors as crew because it was assumed the men wo uld leave