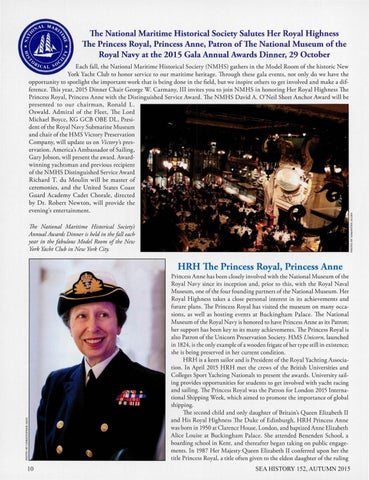 The National Maritime Historical Society Salutes Her Royal Highness The Princess Royal, Princess Anne, Patron of The National Museum of the Royal Navy at the 2015 Gala Annual Awards Dinner, 29 October Each fall, the National Maritime Historical Society (NMHS) gathers in the Model Room of the historic New York Yacht C lub to honor service to our maritime heritage. Through these gala events, not only do we have the opportunity to spotlight the important work that is being done in the field, but we inspire others to get involved and make a difference. This year, 2015 Dinner Chair George W. Carmany, III invites you to join NMHS in honoring Her Royal Highness The Princess Royal, Princess Anne with the Distinguished Service Award. The NMHS David A. O&#39;Neil Sheet Anchor Award will be presented to our chairman, Ronald L. Oswald. Admiral of the Fleet, The Lord Michael Boyce, KG GCB OBE DL, President of the Royal Navy Submarine Museum and chair of the HMS Victory Preservation Company, will update us on 1/ictory&#39;s preservation. America&#39;s Ambassador of Sailing, Gary Jobson, will present the award. Awardwinning yachtsman and previous recipient of the NMHS Distinguished Service Award Richard T. du Moulin will be master of ceremonies, and the United States Coast Guard Academy Cader Chorale, directed by Dr. Robert Newton, will provide rhe evening&#39;s entertainment. The National Maritime Historical Society&#39;s Annual Awards Dinner is held in the fall each year in the fabulous Model Room of the New York Yacht Club in New York City.

HRH The Princess Royal, Princess Anne Princess Anne has been closely involved with rhe National Museum of the Royal Navy since its inception and, prior to this, with the Royal Naval Museum, one of the four founding partners of the National Museum. Her Royal Highness takes a close personal interest in its achievements and future plans. The Princess Royal has visited rhe museum on many occasions, as well as hosting events ar Buckingham Palace. The National Museum of the Royal Navy is honored to have Princess Anne as its Patron; her support has been key to its many achievements. The Princess Royal is also Parron of the Unicorn Preservation Society. HMS Unicorn, launched in 1824, is rhe only example of a wooden frigate of her type still in existence; she is being preserved in her current condition. HRH is a keen sailor and is President of the Royal Yachting Association. In April 2015 HRH met the crews of the British Universities and Colleges Sport Yachting Nationals to present the awards. University sailing provides opportunities for students to get involved with yacht racing and sailing. The Princess Royal was the Patron for London 2015 International Shipping Week, which aimed to promote the importance of global shipping. The second child and only daughter of Britain&#39;s Queen Elizabeth II and His Royal Highness The Duke of Edinburgh, HRH Princess Anne was born in 1950 at Clarence House, London, and baptized Anne Elizabeth Alice Louise at Buckingham Palace. She attended Benenden School, a boarding school in Kent, and thereafter began taking on public engagements. In 1987 Her Majesty Queen Elizabeth II conferred upon her the title Princess Royal, a title often given to the eldest daughter of the ruling