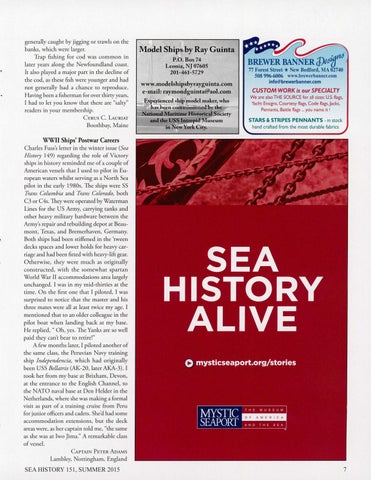 generally caught by jigging or crawls on the banks, which were larger. Trap fishing for cod was common in later years along the Newfo undland coast. It also played a major part in the decline of the cod, as these fish were younger and had not generally had a chance to reproduce. Having been a fisherman for over thirty years, I had to let yo u know that there are "salty" readers in your membership. CYRUS

CUSTOM WORK is our SPECIALTY We are also THE SO URC E for all sizes: U.S. flags, Yacht Ensigns, Courtesy flags, Code flags, Jacks, Pennants, Battle flags ... you name it !

WWII Ships' Postwar Careers Charles Fuss's letter in the winter issue (Sea History 149) regarding the role of Victory ships in history reminded me of a couple of American vessels that I used to pilot in European waters whilst serving as a North Sea pilot in the early 1980s. The ships were SS Trans Columbia and Trans Colorado, both C3 or C4s. They were operated by Waterman Lines for the US Army, carrying tanks and other heavy military hardware between the Army's repair and rebuilding depot at Beaumont, Texas, and Bremerhaven, Germany. Both ships had been stiffened in the 'tween decks spaces and lower holds for heavy carriage and had been fined with heavy-lift gear. Otherwise, they were much as originally constructed, with the somewhat spartan World War II accommodations area largely unchanged. I was in my mid-thirties at the time. On the first one that I piloted, I was surprised to notice that the master and his three mates were all at least twice my age. I mentioned that to an older colleague in the pilot boat when landing back at my base. He replied, " Oh, yes. The Yanks are so well paid they can't bear to retire!" A few months later, I piloted another of the same class, the Peruvian Navy training ship Independencia, which had o riginally been USS Bellatrix (AK-20, later AKA-3). I rook her from my base at Brixham, Devon, at the entrance to the English Channel, to the NATO naval base at Den Helder in the Netherlands, where she was making a formal visit as part of a training cruise from Peru for junior officers and cadets. She'd had some accommodation extensions, but the deck areas were, as her captain told me, "the same as she was at Iwo Jima." A remarkable class of vessel. CAPTAIN P ETER ADAMS