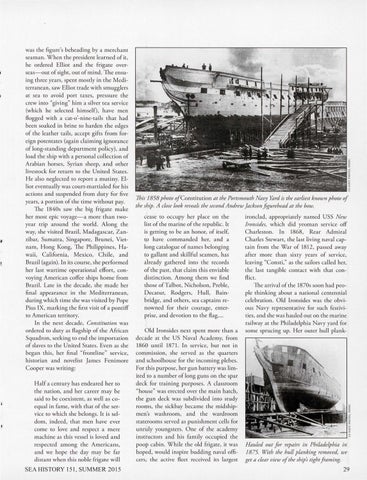 was the figure's beheading by a merchant seaman. When the president learned of it, he ordered Elliot and the fri gate overseas-out of sight, out of mind. The ensuing three years, spent mostly in the M editerranean, saw Elliot trade with smugglers at sea to avoid port taxes, pressure the crew into "giving" him a silver tea service (which he selected himself) , h ave men flo gged with a cat-o'-nine-tails that had been soaked in brine to harden the edges of the leather tails, accept gifts from foreign potentates (again claiming ignorance of long-standing department policy), and load the ship with a personal collection of Arabian horses, Syrian sheep, a nd other lives tock for return to the United States. He also neglected to report a mutiny. Elliot eventually was court-m artialed for his actions and suspended from duty for fi ve years, a portion of the time witho ut pay. The 1840s saw the big frigate make her most epic voyage-a more than twoyear trip a round the world. A lo n g the way, she visited Brazil, Madagasca r, Zanzibar, Sumatra, Singapore, Brunei, Vietnam, Hong Kong, The Philippines, H awaii, California, M exico, C hile, and Brazi l (again). In its course, she performed her las t wartime operational effort, convoying American coffee ships home from Brazil. Lare in the decade, she m ade her fina l appearance in the Mediterranean, during which time she was visited by Pope Pius IX, marking rhe first visit of a pontiff to American territory. In the next decade, Constitution was ordered to duty as fl agship of the African Squadron, seeking to end the impo rtation of slaves to the U nited States. Even as she began this, her final "frondine" service, historian and novelist Jam es Fenimore Cooper was w riting: H alf a century has endeared h er to the nation, and her career may be said to be coexistent, as well as coequal in fame, with that of the service to which she belongs . It is seldom, indeed, that men have ever co me to love and respect a mere machine as this vessel is loved and respected among the Americans, and we hope the day m ay b e far distant when this noble fri gate will SEA HISTORY 151 , SUMMER 2015

This 1858 photo ofCo nstitution at the Portsmouth Navy Yard is the earliest known photo of the ship. A close look reveals the second Andrew Jackson figurehead at the bow.

cease to occupy her place on the list of the m arine of the republic. Ir is getting to be an honor, of itself, rp have commanded her, and a long catalogue of names belonging to gallant a nd skillful seamen, has already gathered into rhe records of rhe past, that claim this enviable distinction. Among them we find those of Talbot, N icholson, Preble, Decatur, Rodgers, Hull, Bainbridge, a nd others, sea captains renowned for their courage, enterprise, and devotion to the flag .... Old Ironsides next spent more than a decade at the US Naval Academy, from 1860 until 187 1. In service, bur nor in commission, she served as the quarters and schoolhouse for the incoming plebes. For this purpose, her gun bat tery was limited to a number of long guns on the spar deck for training purposes. A classroom "house" was erected over the m ain hatch, the g un deck was subdivided into study rooms, the sickbay beca me the midshipm en's washroom, and the wardroom staterooms served as punishment cells for unruly yo ungs ters. One of rhe academy insrt uctors and his fami ly occupied the poop cabin. While the old fri gate, it was hoped , would inspire budding naval officers, rhe active fl eer received its largest

ironcl ad, appropriately named USS New Ironsides, wh ich did yeoman service off C harleston . In 1868, Rear Admiral C harles Stewa rt, the last living naval captain from the War of 1812, passed away afrer more than sixty years of serv ice, leaving "Consti," as the sailors called her, the last tangible contact with rhar conflict. The arrival of the 1870s soon had people thinking about a national centennial celebration. O ld Ironsides was the obvious Navy representative for such festivities, and she was hauled our on the m arine railway at the Philadelphia Navy yard for som e sprucing up. Her outer hull plan k-

Ha uled out for repairs in Philadelphia in 1875. With the hull planking removed, we get a clear view ofthe ship's tight framing.