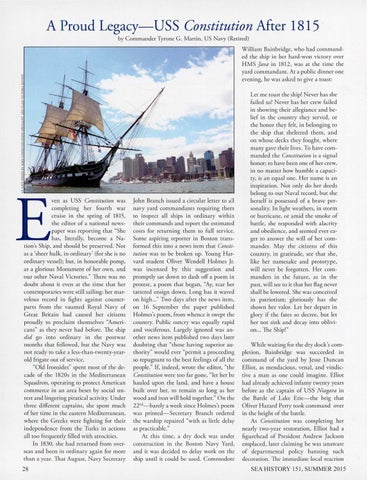 A Proud Legacy-USS Constitution After 1815 by Commander Tyrone G . M arrin, US Navy (Retired) William Bainbridge, who had comma nded the ship in her hard-won victory over HMS Java in 1812, was at the rime the yard commandant. A t a public dinner one evening, he was asked to give a roast:

completing her fourth war cruise in rhe spring of 1815, the editor of a national newspaper was reporting that "She ..,..â&#x20AC;˘ ..__ _ has, literally, become a N ation's Sh ip, and should be preserved. N or as a 'sheer hulk, in ordinary' (for she is no ordinary vessel); but, in honorable pomp, as a glorious M onument of her own, and our other Naval Victories ." There was no doubt about it even at the rime that her contemporaries were still sailing: her marvelous record in fights against counterparts from the vaunted Royal Navy of G reat Britain had caused her citi zens proudly to proclaim themselves "Americans" as they never had before. The ship did go into ordinary in the pos twar month s that followed, but rhe Navy was not ready to rake a less-than-twenty-yearold fri gate our of service. "Old Ironsides" spent most of the decade of the 1820s in the Mediterranean Squadron, operating to protect American commerce in an area beset by social unres t and lingering piratical ac ti vity. U nder three different captains, she spent much of her time in the eas tern Mediterra nean, where the G reeks we re fighting fo r their independence fro m the Turks in ac tions all too frequently filled with atrocities. In 183 0, she had returned fro m overseas a nd been in ordinary again fo r m ore than a yea r. Thar August, Navy Secretary 28

John Branch issued a circular letter to all navy ya rd commandants requiring them to inspect all ships in ordinary within their commands and report the estimated costs for returning them to full service. Some aspiring reporter in Boston transfo rmed this into a news item that Constitution was to be broken up. Youn g H arva rd student Oliver Wendell Holmes Jr. was incensed by this suggestion and promptly sat down to dash off a poem in pro test, a poem that began, "Ay, tear her ta ttered ensign down, Long has it waved on high ... " Two days after the news item, on 16 September the paper published Holmes's poem, from whence it swept the country. Public o utcry was equally rapid and vociferous. Largely ignored was another news item published two days later doubting rhar "those having superior authority" would ever "permit a proceeding so repugnant to the best feelings of all the people." If, indeed, wrote the editor, "the Constitution were too fa r gone, "let her be hauled upon the land, and have a house built over her, to rem ain so long as her wood and iron w ill hold together." O n the 22"d-barely a week since Holmes's poem was printed-Secretary Branch ordered the warship repaired "with as little delay as prac ticable." At this time, a dry dock was under construction in rhe Boston Navy Ya rd , and it was decided to delay wo rk on the ship until it could be used. Commodore

Let me toast the ship! N ever has she fa iled us! Never has her crew fa iled in showing their allegiance and belief in the country they served, or the honor they felt, in belonging to the ship that sheltered them, and on whose decks they fo ught, where many gave their lives. To have com manded the Constitution is a signal ho nor; to have been one of her crew, in no m atter how humble a capacity, is a n equal one. H er name is a n inspiratio n. No r only do her deeds belong to our Naval record, bur she herself is possessed of a brave personality. In light weathers, in srorm or hurricane, or amid the sm oke of battle, she responded with alacrity and obedience, and seem ed ever eager to answer the will of her comm ander. M ay the citizens of this country, in gratitude, see that she, li ke her na mesake a nd prototype, will never be fo rgotten. H er comm anders in the future, as in the pas t, w ill see to it that her flag never shall be lowered. She was conceived in patriotism; gloriously h as she shown her valor. Let her depart in glory if the fa res so decree, bur let her no r sink a nd decay into oblivio n ... The Ship! " W hile waiting fo r the dry dock 's completion, Bainbridge was succeeded in comma nd of the yard by Jesse Duncan Elliot, as m endacious, venal, and vindictive a m an as one could imagine. Elliot had already achieved infamy twenty years before as the captain of USS Niagara in the Bartle of Lake Erie-the brig that O live r H aza rd Perry rook command over in the height of the battle. As Constitution was completing her nea rly two-yea r restoration, Elliot had a figurehead of President Andrew Jackson emplaced , later cla iming he was unawa re of depa rtmental policy banning such decoration. The immediate local reaction SEA HISTORY 151 , SUMMER 2015