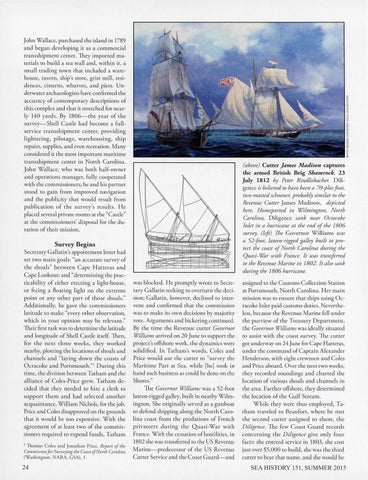 John Wallace, purchased the island in 1789 and began developing it as a commercial transshipment center. They imported materials to build a sea wall and, w ithin it, a sm all trading town chat included a warehouse, tavern, ship's store, grist mill, residences, cis terns, wharves, and piers. U nderwater archaeologists have confirmed the accuracy of contemporary descriptions of this complex and chat it screeched fo r nearly 140 yards. By 180 6 -che year of the survey-S hell Castle h ad becom e a full serv ice transsh ipment center, p rov idin g lightering, pilocage, w a rehousing, ship repairs, supplies, and even recreation. M any considered it the most important maritime tra nsshipment center in North Carolina. John Wallace, who was both half-ow ner and operations m anager, full y cooperated wit h the commissioners; he and his partner stood to gain from improved navigation and the publicity chat would result fro m publication of the sur vey's res ults. H e placed several private rooms at the "Castle" at the co mmissioners' disposal fo r the duration of t heir mission .

(above) Cutter fames Madison captures the armed British Brig Shamrock, 23 July 1812 by Peter Rindlisbacher. D iligence is believed to have been a 70-p lus foot, two-masted schooner, probabry similar to the Revenue Cutter Jam es M adison, depicted here. H omeported in Wilmington, North Carolina, Diligence sank near Ocracoke Inlet in a hurricane at the end of the 1806 survey. (left) The Governor Williams was a 52-foot, lateen-rigged galley built to protect the coast of North Carolina during the Quasi- "Wtir with France. It was transferred to the Revenue Marine in 1802 . It also sank during the 1806 hurricane.

Survey Begins Secretary Gallacin's appointment letter had set two main goals: "an accurate survey of the shoals" between Cape H atteras a nd Cape Lookout; and "determining the practicability of either erecting a light-house, or fix ing a Boating light on the extrem e point or a ny other part of chose shoals." Additio nally, he gave the commissioners latitude to make "every other observation , wh ich in your opinion may be relevant." Their first task was to determine the latitude and longitude of Shell Castle itself. Then, for the next t hree week s, they worked nearby, plotting the locations of shoals and channels and "laying down the coasts of Ocracoke and Portsmouth." 1 Du ring chis time, the division between Tatham and the alliance of Coles-Price grew. Tatham decided chat they needed to hire a clerk to support chem and had selected another acquaintance, W illiam Nichols, fo r the job. Price and Coles disapproved on the grounds chat it would be too expensive. W ith the agree ment of at least two of the commissioners required to expend funds, Tath am 1 Th oma s Coles and Jonarh an Price, Report of the Commission for Surveying the Coast ofNorth Carolina

was blocked . He promptly wrote to Secretary Gallatin seeking to overturn the decision; Gallatin, however, declined to intervene and confirmed chat the commission was to m ake its own decisions by m ajority vote. Arguments and bickering continued. By the time the Revenue cutter Governor Williams arrived on 20 June to support the project's offshore wo rk, the dynamics were solidified . In Tacha m's wo rds, Coles and Price would use t he cutter to "survey the Maritime Part at Sea, while [he] took in hand such business as could be done on the Shores." The Governor Williams was a 52-foot laceen-rigged galley, built in nearby Wilmington. She origin ally served as a gunboat to defend sh ipping along the No rth Carolina coast fro m the predations of French privateers d u ring the Q uasi-Wa r w it h France. W ith the cessation of hostilities, in 1802 she was transferred to the US Revenue M arine- predecessor of the US Revenue C utter Service and the Coast G uard- and

assigned to the Customs Collection Statio n at Portsmouth, No rth Carolina. H er m ain mission was to ensure chat ships using Ocracoke Inlet paid customs duties. N evertheless, because the Revenue Marine fell under the purview of the Treasury Department, the Governor Williams was ideally situated to assist with the coast su rvey. The cutter got underway on 24 June for Cape H atteras, under the comm and of Captain Alexander H enderson, w ith eight crewmen and Coles and Price aboard. Over the next two weeks, they recorded soundings and charted the location of various shoals and channels in the area. Farther offsho re, they determined the location of the G ulf Scream . W hile they were thus employed, Tatham traveled to Beaufo rt, where he met the seco nd cutter assigned to chem , th e Diligence. The few Coast G uard records concerning the Diligence give only fo ur fac ts: she entered service in 1803, she cost just over $5,000 to build, she was the third cutter to bear that name, and she would be