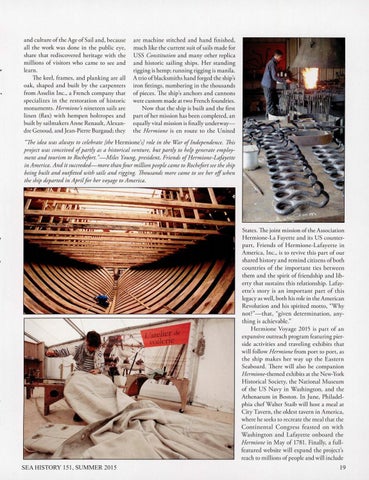 and culture of the Age of Sail and, because all the work was done in the public eye, share that rediscovered heritage with the millions of visitors who cam e to see and learn. The keel, fram es, and planking are all oak, sh aped and built by the carpenters from Asselin Inc., a French company that sp ecializes in the restoration of historic monuments. H ermione's nineteen sails are linen (fl ax) w ith hempen boltropes and built by sailmakers Anne Renault, Alexandre Genoud, and Jean-Pierre Burgaud; they

are m achine stitched and h and finished , much like the current suit of sails m ade for USS Constitution and m any other replica and h is to ric sailin g ships. H er sta nding rigging is hemp; runn ing rigging is manila. A trio of blacksmiths hand fo rged the ship's iron fitt ings, numbering in the thousands of pieces. The sh ip's anchors and cannons were custom made at two French fo undries. N ow that the ship is built a nd the first part of her mission has been completed, an equally vital mission is fi nally underwaythe H ermione is en route to the U nited

"The idea was always to celebrate [the H ermione's] role in the War ofIndependence. This project was conceived ofpartly as a historical venture, but partly to help generate employment and tourism to Rochefort. "-Miles Young, president, Friends ofH ermione-Lafayette in America. And it succeeded-more than four million people came to Rochefort see the ship being built and outfitted with sails and rigging. Thousands more came to see her off when the ship departed in Ap ril fo r her voyage to America.

States. The joint mission of the Association H ermione-La Fayette and its US counterpa rt, Friends of H ermione-Lafayette in A merica, Inc., is to revive this part of our shared history and remind citizens of both countries of the important ties bet ween them and the spirit of friendship and liberty that sustains this relationship. Lafayette's sto ry is an important pa rt of this legacy as well, both his role in the American Revolution and his spirited m otto, "W hy not?"- that, "given determination , anything is achievable." H ermione Voyage 2015 is part of an expansive outreach program fea turing pierside activities and traveling exhibits that will fo llow H ermione from port to port, as the sh ip m akes her way up the Eas tern Seaboard. There will also be companion H ermione-them ed exhibits at the New-York Historical Society, the National M useum of the US Navy in W ashington, and the Athenae um in Boston. In June, Philadelphia chef Walter Staib will host a meal at C ity Tavern, the oldest tavern in A merica, where he seeks to recreate the meal that the Continental C ongress feas ted o n w ith Washington and Lafaye tte onboard the H ermione in M ay of 178 1. Finally, a fullfea tured website will expand the project's reach to m illions of people and will include SEA HISTORY 151 , SUMMER 2015