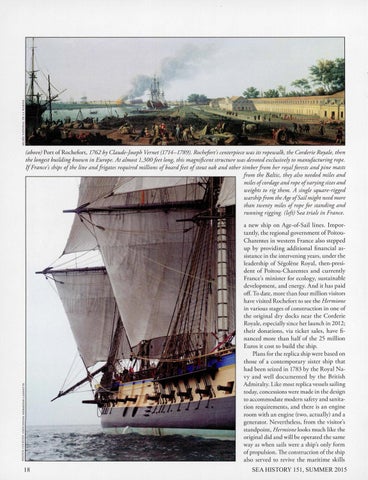 (above) Port of Rochefort, 1762 by Claude-Joseph Vernet (1714-1789). Rochefort's centerpiece was its ropewalk, the Corderie Royale, then the longest building known in Europe. At almost 1,300 feet long, this magnificent structure was devoted exclusively to manufacturing rope. IfFrance's ships of the line and frigates required millions of board feet ofstout oak and other timber from her royal forests and pine masts from the Baltic, they also needed miles and miles ofcordage and rope ofvarying sizes and weights to rig them. A single square-rigged warship from the Age ofSail might need more than twenty miles of rope for standing and running rigging. (left) Sea trials in France.

a new ship on Age-of-Sail lines. Importantly, the regional government of PoitouCharentes in western France also stepped up by providing additional financial assistance in the intervening years, under the leadership of Segolene Royal, then-president of Poitou-Charentes and currently France's minister for ecology, sustainable development, and energy. And it has paid off. To date, more than four million visitors have visited Rochefort to see the Hermione in various stages of construction in one of the original dry docks near the Corderie Royale, especially since her launch in 2012; their donations, via ticket sales, have financed more than half of the 25 million Euros it cost to build the ship. Plans for the replica ship were based on those of a contemporary sister ship that had been seized in 1783 by the Royal Navy and well documented by the British Admiralty. Like most replica vessels sailing today, concessions were made in the design to accommodate modern safety and sanitation requirements, and there is an engine room with an engine (two, actually) and a generator. Nevertheless, from the visitor's standpoint, Hermione looks much like the original did and will be operated the same way as when sails were a ship's only form of propulsion. The construction of the ship also served to revive the maritime skills