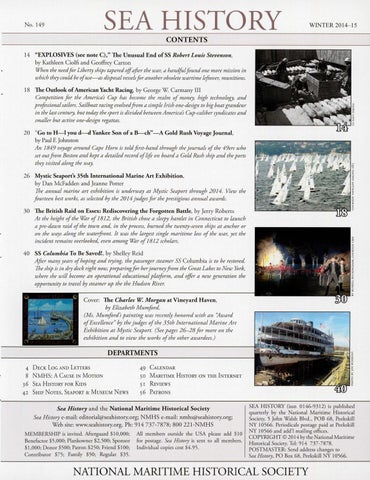 CONTENTS 14 &quot;EXPLOSIVES (see note C),&quot; The Unusual End of SS Robert Louis Stevenson, by Kathleen Ciolfi and Geoffrey Carron When the needfor Liberty ships tapered offafter the war, a handfulfound one more mission in which they could be ofuse-as disposal vessels for another obsolete wartime leftover, munitions.

18 The Outlook of American Yacht Racing, by George W Carmany III Competition for the America&#39;s Cup has become the realm of money, high technology, and professional sailors. Sailboat racing evolvedfrom a simple Irish one-design to big boat grandeur in the last century, but today the sport is divided between America&#39;s Cup-caliber syndicates and smaller but active one-design regattas.

20 &quot;Go to H-1 you d-d Yankee Son of a B-ch&quot;-A Gold Rush Voyage Journal, by Paul F. Johnston An 1849 voyage around Cape H orn is told first-hand through the journals of the 49ers who set out from Boston and kept a detailed record oflife on board a Gold Rush ship and the ports they visited along the way.

26 Mystic Seaport&#39;s 35th International Marine Art Exhibition, by Dan McFadden and Jeanne Porter The annual marine art exhibition is underway at Mystic Seaport through 2 014. View the fourteen best works, as selected by the 2 014 judges for the prestigious annual awards.

30 The British Raid on Essex: Rediscovering the Forgotten Battle, by Jerry Roberts At the height of the Wtzr of 18 12, the B ritish chose a sleepy hamlet in Connecticut to launch a pre-dawn raid of the town and, in the p rocess, burned the twenty-seven ships at anchor or on the ways along the waterfront. It was the largest single maritime loss of the war, yet the incident remains overlooked, even among Wtzr of 18 12 scholars.

40 SS Columbia To Be Saved!, by Shelley Reid After many years of hoping and trying, the passenger steamer SS Columbia is to be restored. The ship is in dry dock right now, preparingfor her journey from the Great Lakes to New York, where she will become an operational educational p latform, and offer a new generation the opportunity to travel by steamer up the the H udson River.

Cover: The Charles W. Morgan at Vineyard Haven, by Elizabeth Mumford. (Ms. Mumford&#39;s p ainting was recently honored with an &quot;Award ofExcellence&quot; by the judges of the 35th International Marine Art Exhibition at Mystic Seaport. (See pages 26-28 for more on the exhibition and to view the works of the other awardees.)