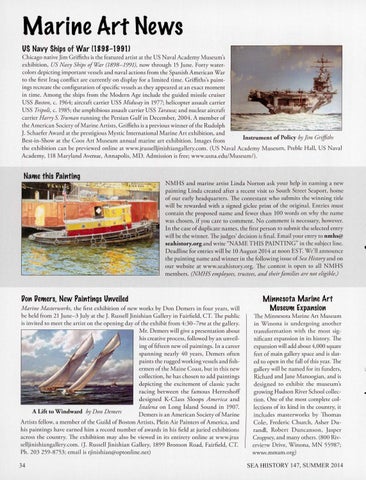 NatMe this Pait1tit1g NMHS and m arine artist Linda N orton ask your help in naming a new painting Linda created after a recent visit to South Street Seaport, home of our early headquarters. The contestant w ho submits the winning ride will be rewarded with a signed giclee print of the original. Entries must contain rhe proposed name and fewer than 100 words on why rhe name was chosen, if you care to comment. No comment is necessary, however. In the case of duplicate names, rhe first person to submit the selected entry will be the winner. The judges&#39; decision is final. Em ail your entry to nmhs@ seahistory.org and write &quot;NAME THIS PAINTING&quot; in the subject line. D eadline for entries will be 10 August 2014 at noon EST. We&#39;ll announce rhe painting name and winner in rhe following issue of Sea History and on our website at www.seahistory.org. The contest is open to all NMHS m embers. (NMH S employees, trustees, and theirfamilies are not eligible.)

Uotl UetMers, New Pait1tit1gs Utlveiled Marine Masterwo rks, the first exhibition of new works by Don Demers in four years, will be held from 21 June-3 July at rhe]. Russell Jinishian Gallery in Fairfield, CT. The public is invited to meet rhe artist on the opening day of the exhibit from 4:30-7PM at rhe gallery. Mr. Demers will give a presentation about his creative process, followed by an unveiling of fifteen new oil paintings. In a career sp an ning nearly 40 yea rs, Demers often paints the rugged wo rking vessels and fishermen of rhe Maine Coast, bur in this new collection, he h as chosen to add paintings depicting the excitem ent of classic yacht racing between the famo us Herreshoff d esigned K-Class Sloops America a nd Istalena on Long Island Sound in 1907. A Lift to Windward by Don Demers Demers is an American Society of Marine Artists fellow, a member of rhe G uild of Boston A rtists, Plein A ir Painters of Am erica, and his paintings have earned him a record number of awards in his field at juried exhibitions across the country. The exhibition may also be viewed in its entirety online at www.jrus selljinishiangallery.com. (J. Russell Jinishian Gallery, 1899 Bronson Road, Fairfield, CT. Ph. 203 259-8 753; email is rjinishian@opton line.net) 34

Mit1t1esota Maritle Art MuseutM Expat1siot1 The M innesota Marine Arr Museum in Winona is undergoing anoth er transformation with the most significant expansion in its history. The expansion will add abo ut 4,000 square feet of main gal lery space and is slated to open in the fall of this year. The gallery will be named for its funders, Richard and Jane Manoogian, and is designed to exhibit the museum&#39;s growing Hudson River School collection. One of the most complete collections of its kind in the country, it incl udes m asterworks by Thomas Cole:, Frederic Church, Asher Durand!, Robert Duncanson, Jasp er Croi:psey, and m any others. (800 Rive rvie~w Drive, Winona, MN 55987; wwwv. mmam.org) SEAHl.ISTORY 147, SUMMER 20 14