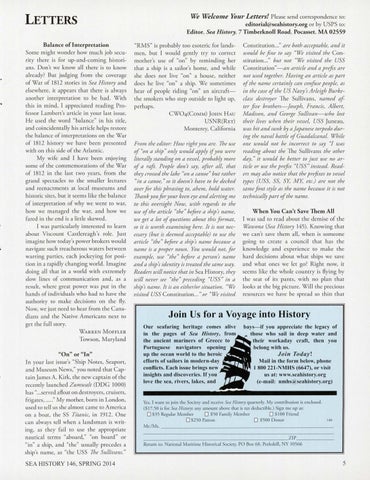 LETTERS Balance of Interpretation Some m ight wonder how m uch job security there is fo r up-and-coming historians. D on&#39;t we kn ow all there is to k now already? But judging from the coverage of Wa r of 1812 stories in Sea H istory and elsewhere, it appears that there is always another interpre tation to be h ad . W ith thi s in mind, I appreciated reading Professor Lambert&#39;s article in yo ur las t issue. H e used the word &quot;balance&quot; in his tide, a nd coincidentally his article helps resto re the balance of interpretations on the Wa r of 1812 history we have been presented with on this side of the Atlantic. My wife and I have been enjoying som e of the commemorations of the War of 1812 in the las t two years, from the grand spectacles to the sm aller lect ures and reenac tments at local museums a nd historic sites, but it seems like the balance of interpretation of why we we nt to war, how we managed the war, and how we fa red in the end is a little skewed . I was particularly interested to learn about Viscount C astlereagh &#39;s role. Just imagine how today&#39;s power brokers wo uld navigate such treacherous waters between warring parties, each jockeying for position in a rapidly changing world. Imagine doing all that in a world w ith extremely slow lines of communication and, as a result, where great power was p ut in the hands of individuals who had to have the autho rity to m ake decisions o n the fly. Now, we just need to hear from the Ca nadians and the Native Americans next to get the full story. WARR EN M oFFLER Towson, Ma ryland &quot; On&quot; or &quot; In&quot; In yo ur las t issue&#39;s &quot;Ship No tes, Seaport, and M useum News,&quot; yo u noted th at Capta in James A. Kirk, the new captain of the recently launched Zumwalt (DDG 1000) has &quot;... served afloat on dest roye rs, cruisers, fri gates, ..... &quot; My mother, bo rn in Lo ndon, used to tell us she almos t came to America on a boat, the SS Titanic, in 1912. O ne can always tell when a la ndsm an is writing, as they fai l to use the appropriate nautical terms &quot;aboard,&quot; &quot;on board &quot; or &quot;in&quot; a ship, and &quot;the&quot; usually precedes a ship&#39;s name, as &quot;the USS The Sullivans. &quot;

We Welcome Your Letters! P lease send correspondence to : editorial@seahistory.org or by U SPS to : Editor, Sea History, 7 Timberknoll Road, Pocasset , MA 02559 &quot;RMS &quot; is probably too esoteric fo r landsmen, but I wou ld ge ntly try to correct mother&#39;s use of &quot;on&quot; by reminding her that a ship is a sailor&#39;s hom e, and while she does not live &quot;on&quot; a house, neither does he live &quot;on&quot; a sh ip. We sometimes hear of people riding &quot;on&quot; an aircraftthe smokers who step outside to light up, perh aps. CW04(Co MM) JoHN H Au USN R (R ET) Monterey, California

From the editor: H ow right y ou are. The use of &quot;on a ship&quot; only would apply ifyou were literally standing on a vessel, p robably more of a raft. People don&#39;t say, after all, that they crossed the lake &quot;on a canoe&quot; but rather &quot;in a canoe,&quot; so it doesn&#39;t have to be decked over for this phrasing to, ahem, hold water. Thank you for y our keen eye and alerting me to this oversight Now, with regards to the use of the article &quot;the&quot; before a ship&#39;s name, we get a lot of questions about this form at, so it is worth examining here. ft is not necessary (but is deemed acceptable) to use the article &quot;the&quot; before a ship&#39;s name because a name is a proper noun. You would not, for example, use &quot;the&quot; before a person&#39;s name and a ship&#39;s identity is treated the same way. Readers will notice that in Sea History, they will never see &quot;the&quot; p receding &quot;USS&quot; in a ship&#39;s name. ft is an either/or situation. &quot;We visited USS C onstitution ... &quot; or &quot;We visited

Constitution .. .&quot; are both acceptable, and it would be fine to say &quot;We visited the Constitution ...&quot; but not &quot;We visited the USS Consti tution&quot;-an article and a p refix are not used together. H aving an article as part of the name certainly can confuse people, as in the case ofthe US Navy&#39;s Arleigh Burkeclass destroyer The Sullivans, named af ter five brothers-Joseph, Francis, Albert, Madison, and George Sullivan- who lost their lives when their vessel, USS Juneau, was hit and sunk by a Japanese torpedo during the naval battle of Guadalcanal. While one would not be incorrect to say 7 was reading about the The Sull iva ns the other day, &quot; it would be better to just use no article or use the prefix &quot;USS &quot; instead. Readers may also notice that the prefixes to vessel types (USS, SS, SY, MY, etc.) are not the same fo nt style as the name because it is not technically part ofthe name. W hen You Can &#39;t Save Them All I was sad to read about the demise of the Wawona (Sea H istory 145). Kn owing that we can&#39;t save t hem all , when is someone going to create a council that has the k nowled ge and experience to make the hard decisions abo ut wh at ships we save and what ones we let go? Ri ght now, it seem s like the whole country is flying by the seat of its pants, w ith no plan that looks at the big pictu re. Will the precious resources we have be spread so thin that

Join Us for a Voyage into History Our seafaring heritage comes alive in the pages of Sea Histo1y , from the ancient mariners of Greece to Portuguese navigators openin g up the ocean world to the heroic efforts of sailors in modern-da y conflicts. Each issue brin gs new insights and discoveries. If you love the sea, rivers, lakes, and

bays-if you appreciate the legacy of those who sa il in deep water and their workaday craft, then you belong with us.