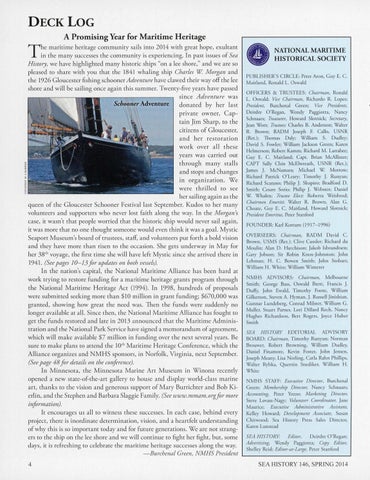 he maritime heritage community sails into 2014 with great hope, exultant in the many successes the community is experiencing. In past issues of Sea History, we have highlighted many historic ships &quot;on a lee shore,&quot; and we are so pleased to share with you that the 1841 whaling ship Charles W Mo rgan and the 1926 Gloucester fishing schooner Adventure have clawed their way off the lee shore and will be sailing once again this summer. Twenty-five years have passed since Adventu re was Schooner Adventure donated by her last private owner, Captain Jim Sharp, to the citizens of Gloucester, and her restoration work over all these years was carried out through many stalls and stops and changes in organization. We were thrilled to see her sailing again as the queen of the Gloucester Schooner Festival last September. Kudos to her many volunteers and supporters who never lost faith along the way. In the Morgan&#39;s case, it wasn&#39;t that people worried that the historic ship would never sail again, it was more that no one thought someone would even think it was a goal. Mystic Seaport Museum&#39;s board of trustees, staff, and volunteers put forth a bold vision and they have more than risen to the occasion. She gets underway in May for her 38&#39;h voyage, the first time she will have left Mystic since she arrived there in 1941. (See pages 10-13 for updates on both vessels). In the nation&#39;s capital, the National Maritime Alliance has been hard at work trying to restore funding for a maritime heritage grants program through the National Maritime Heritage Act (1994). In 1998, hundreds of proposals were submitted seeking more than $10 million in grant funding; $670,000 was granted, showing how great the need was. Then the funds were suddenly no longer available at all. Since then, the National Maritime Alliance has fought to get the funds restored and late in 2013 announced that the Maritime Administration and the National Park Service have signed a memorandum of agreement, which will make available $7 million in funding over the next several years. Be sure to make plans to attend the lO&#39;h Maritime Heritage Conference, which the Alliance organizes and NMHS sponsors, in Norfolk, Virginia, next September. (See page 48 for details on the conference). In Minnesota, the Minnesota Marine Art Museum in Winona recently opened a new state-of-the-art gallery to house and display world-class marine art, thanks to the vision and generous support of Mary Burrichter and Bob Kierlin, and the Stephen and Barbara Slaggie Family. (See www.mmam.orgfor more information). It encourages us all to witness these successes. In each case, behind every project, there is inordinate determination, vision, and a heartfelt understanding of why this is so important today and for future generations. We are not strangers to the ship on the lee shore and we will continue to fight her fight, but, some days, it is refreshing to celebrate the maritime heritage successes along the way. -Burchenal Green, NMHS President 4