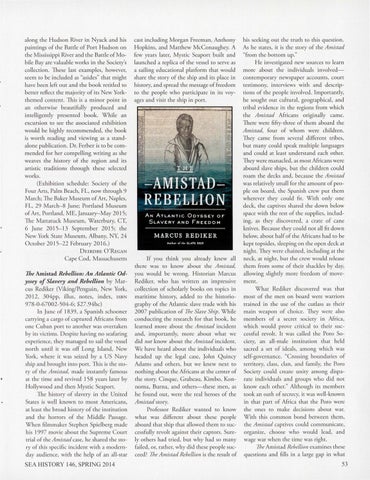 along the Hudson River in Nyack and his pai ntings of the Battle of Port Hudson on the Mississippi River and the Battle of Mobile Bay are valuable works in the Society&#39;s collection. These last examples, however, seem to be included as &quot;asides&quot; that might have been left out and the book retitled to better reflect the majority of its New Yorkthemed content. This is a minor point in an otherwise beaurifully produced and intelligently presented book. While an excursion to see the associated exhibition wo uld be highly recommended, the book is worth reading and viewing as a standalone publication. Dr. Ferber is to be commended for her compelling writing as she weaves the history of the region and its artistic traditions through these selected works. (Exhibition schedule: Society of the Four Arts, Palm Beach, FL, now through 9 March; The Baker Museum of Art, Naples, FL, 29 March-8 June; Portland Museum of Art, Portland, ME, January-May 20 15; The Mattatuck Museum, Waterbury, CT, 6 June 2015-13 September 20 15; the New York State Museum, Albany, NY, 24 October 20 15-22 February 201 6.)

cast including Morgan Freeman, Antho ny Hopkins, and Matthew McConaughey. A few years later, Mystic Seaport built and launched a replica of the vessel to serve as a sailing educational platform that would share the story of the ship and its pl ace in history, and spread the message of freedom to the people who participate in its voyages and visit the ship in port.

The Amistad Rebellion: An Atlantic Odyssey of Slavery and Rebellion by Marcus Rediker (Viking/Penguin, New York, 20 12, 304pp, illus, notes, index, ISBN 978-0-67002-504-6; $27 .94hc) In June of 1839, a Spanish schoo ner carrying a cargo of captured Africans fro m one C uban port to another was overtaken by its victims. Despite having no seafaring experience, they managed to sai l the vessel north until it was off Long Island, New York, where it was seized by a US Navy ship and brought into port. This is the story of the Amistad, made instantly famo us at the time and revived 15 8 years later by Hollywood and then Mystic Seapo rt. 1h e history of slavery in the United Srares is well known to most Americans, at least the broad histo ry of the institution and the horrors of the Middle Passage. When fi lmmaker Stephen Spielberg made his 1997 movie about the Sup reme Court trial of the Amistad case, he shared the story of this specific incident with a modernday audience, with the help of an all-star

If yo u think yo u already knew all there was to know about the Amistad, yo u wo uld be wrong. Historian Marcus Rediker, who has written an impressive collection of scholarly books on topics in maritime history, added to the historiography of the Atlantic slave trade with his 2007 publication of The Slave Ship. While conducting the research fo r that book, he learned more about the Amistad incident and, importantly, more abo ut what we did not know about the Amistad incident. We have heard about the individuals who headed up the legal case, John Quincy Adams and others, but we knew next to nothing about the Africans at the center of the story. C inque, Grabeau, Kimbo, Konnoma, Burn a, and others-these men, as he found o ut, were the real heroes of the Amistad story. Professor Rediker wanted to know what was different abo ut these people aboard that ship that allowed them to successfully revolt against their captors. Surely others had tried, but why had so many failed, or, rather, why did these people succeed? The Amistad Rebellion is the result of

his seeking out the truth to this question. As he states, it is the sto ry of the Amistad &quot;from the bottom up.&quot; He investigated new sources to learn more about the individuals involvedco ntemporary newspaper accounts, court testimo ny, interviews with and descriptions of the people involved. Importantly, he sought out cultural, geographical, and tribal evidence in the regions from which the Amistad Africans originally cam e. There were fifty-three of them aboard the Amistad, fo ur of whom were children. 1 h ey came from several different tribes, but many could speak multiple languages and could at least understand each other. They were manacled, as most Africans were aboard slave ships, but the children could roam the decks and, because the Amistad was relatively small for the amount of people on board, the Span ish crew put them wherever they could fir. With only one deck, the captives shared the down below space with the rest of the supplies, including, as they discovered, a crate of cane knives. Because they could not all fir down below, about half of the Africans had to be kept topsides, sleeping on the open deck at night. They were chained, including at the neck, at night, but the crew would release them from some of their shackles by day, allowing slightly more freedom of movement. What Rediker discovered was that most of the men on board were warriors trained in the use of the cutlass as thei r main weapon of choice. They were also members of a secret society in Africa, which would prove critical to their successful revolt. It was called the Poro Society, an all-male institution that held sacred a set of ideals, among which was self-governance. &quot;Crossing boundaries of territory, class, clan, and fam ily, the Poro Society could create uni ty among disparate individuals and gro ups who did not know each other.&quot; Although its members took an oath of secrecy, it was well-known in that part of Africa that the Poro were the ones to make decisions about wa r. With this commo n bo nd between them, the Amistad captives could comm unicate, organize, choose who wo uld lead, and wage war when the time was right. The Amistad Rebellion exam in es these questions and fills in a large gap in what