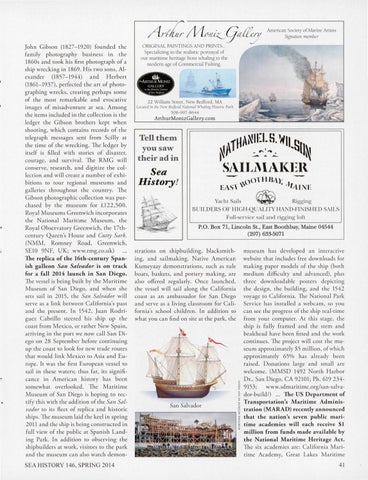 AZ Mt!!tiz,9~ John Gibson (1827-1920) founded the family photography business in the 1860s and took his first photograph of a ship wrecking in 1869. His two sons, Alexander (1857-1944) and Herbert (1861-1937), perfected the art of photographing w recks, creating perhaps some of the most remarkable and evocative images of misadventure at sea. Among the items included in the collection is the ledger the Gibson brothers kept when shooting, which contains records of the telegraph messages sent from Scilly at the time of the wrecking. The ledger by itself is filled with stories of disaster, courage, and survival. The RMG wi ll conserve, research, and digitize the collection and will create a number of exhibitions to tour regional museums and galleries throughout the country. The Gibson photographic collection was purchased by the museum for £122,500. Royal Museums Greenwich incorporates the National Maritime Museum, the Royal Observatory Greenwich, the 17thcentury Queen&#39;s House and Cutty Sark. (NMM, Romney Road, Greenwich, SE10 9NF, UK; www.rmg.co.uk) The replica of the 16th-century Spanish galleon San Salvador is on track for a fall 2014 launch in San Diego. The vessel is being built by the Maritime Museum of San Diego, and when she sets sa il in 2015, the San Salvador wi ll serve as a link between Californi a&#39;s past and the present. In 1542, Ju an Rodriguez Cabrillo steered his ship up the coast from Mexico, or rather New Spain, arriving in the port we now call San Diego on 28 September before cont inuing up the coast to look for new trade routes that wou ld lin k Mexico to Asia and E urope. It was the first European vessel to sai I in these waters; thus far, its signifi cance in America n history has been somewhat overlooked. The Maritime Museum of San Diego is hoping to rectify thi s with the addition of the San Salvador to its fleet of replica and historic ships. The museum laid the keel in spri n g 2011 and the ship is being constructed in fu ll view of the public at Spanish Landing Park. In additio n to observing the shipbu ilders at work, visitors to the park and the museum can also watch demon-

ORIGINAL PAINTINGS AND PRINTS.. Specializing in the realistic portrayal of our maritime hetitage from whaling to the modern age of Commercial Fishing.

Tell them you saw their ad in

YachL Sails Rigging B ILDERS OF HIGH-Q ALITYHAND-F INISHED SAJLS Full-service sail and rigging loft P.O. Box 71, Lincoln St., East Boothbay, Maine 04544 (207) 633-5071 strations on shipbuilding, blacksmithing, and sai lmaking. Native American Kumeyaay demonstrations, such as tule boats, baskets, and pottery making, are also offered regularly. Once launched, the vessel will sail along the California coast as an ambassador for San Diego and serve as a living classroom for California&#39;s school children . In addition to what you can find on site at the park, the

museum has developed an interactive website that includes free downloads for making paper models of the ship (both medium difficulty and advanced), plus three downloadable posters depicting the design , the building, and the 1542 voyage to Cali fornia. The National Park Service h as installed a webcam, so you can see the progress of the ship rea l-time from your computer. At this stage, the ship is fully framed and the stem and beakhead have been fitted and the work continu es. 1he project will cost the museum approx imately $5 million, of which approximately 65% has already been raised. Donations large and small are welcome. (MMSD 1492 North Harbor Dr. , San Diego, CA 92 101 ; Ph . 619 2349153; www.sdmaritime.org/san-salvador-buildl) ... The US Department of Transportation&#39;s Maritime Administration (MARAD) recently announced that the nation&#39;s seven public maritime academies will each receive $1 million from funds made available by the National Maritime Heritage Act. The six academies are: California Maritime Academy, Great Lakes Maritime