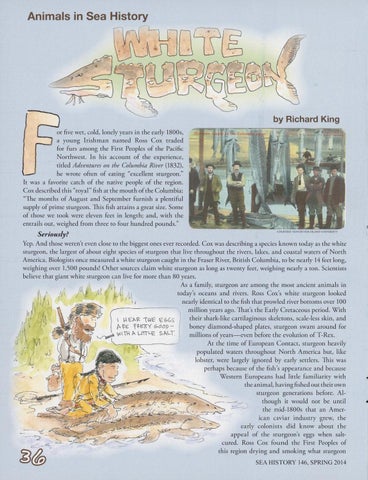 by Richard King or five wet, cold, lonely years in the early 1800s, a young Irishman named Ross Cox traded for furs among the First Peoples of the Pacific Northwest. In his account of the experience, titled Adventures on the Columbia River (1832), he wrote often of eating &quot;excellent sturgeon.&quot; It was a favorite catch of the native people of the region. Cox described this &quot;royal&quot; fish at the mouth of the Columbia: &quot;The months of August and September furnish a plentiful supply of prime sturgeon. This fish attains a great size. Some of those we took were eleven feet in length; and, with the entrails out, weighed from three ro four hundred pounds.&quot; CO U RT ES Y VANCOUV ER ISLAND U N IVERS IT Y

Yep. And those weren&#39;t even close to the biggest ones ever recorded. Cox was describing a species known today as the white sturgeon, the largest of about eight species of sturgeon that live throughout the rivers, lakes, and coastal waters of North America. Biologists once measured a white sturgeon caught in the Fraser River, British Columbia, to be nearly 14 feet long, weighing over 1,500 pounds! Other sources claim white sturgeon as long as twenty feet, weighing nearly a ton. Scientists believe that giant white sturgeon can live for more than 80 years. ~~ ~ { As a family, sturgeon are among the most ancient animals in 1 )Ji I 1 today&#39;s oceans and rivers. Ross Cox&#39;s white sturgeon looked . Âˇ iJ nearly identical to the fish that prowled river botroms over 100 million years ago. That&#39;s the Early Cretaceous period. With their shark-like cartilaginous skeletons, scale-less skin, and \ WEA~ &quot;11-\&#39;2 ~&amp;G e;; (;.f.&#39;t. ~~Elf Y &amp;aopboney diamond-shaped plates, sturgeon swam around for ~ \Nin\/\ U iT LE SA.LT millions of years-even before the evolution of T-Rex. At the time of European Contact, sturgeon heavily populated waters throughout North America but, like lobster, were largely ignored by early settlers. This was perhaps because of the fish&#39;s appearance and because Western Europeans had little familiarity with the animal, having fished out their own sturgeon generations before. Although it would not be until the mid-1800s that an American caviar industry grew, the early colonists did know about the appeal of the sturgeon&#39;s eggs when saltcured. Ross Cox found the First Peoples of this region drying and smoking what sturgeon