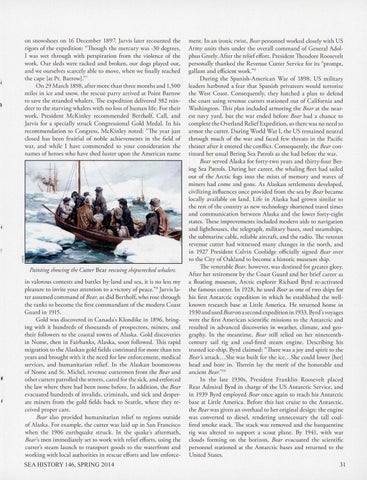 on snowshoes on 16 December 1897. Jarvis later recounted the rigors of the expedition: "Though the mercury was -30 degrees, I was wet through with perspiration from the violence of the work. Our sleds were racked and broken, our dogs played out, and we ourselves scarcely able to move, when we finally reached the cape [at Pt. Barrow]." 7 On 29 March 1898 , after more than three months a nd 1,5 00 miles in ice and snow, the rescue party arrived at Point Barrow to save the stranded whalers. The expedition delivered 382 reindeer to the starving whalers with no loss of human life. For their work, President McKinley recommended Bertholf, Call, and Jarvis for a specially struck Congressional Gold Medal. In his recommendation to Congress, McKinley noted: "The year just closed has been fruitful of noble achievements in the field of war, and while I have commended to yo ur consideration the names of heroes who have shed luster upon the American name

in valorous contests and battles by land and sea, it is no less my pleasure to invite your attention to a victory of peace." 8 Jarvis later assumed comm and of Bear, as did Bertholf, who rose through the ranks to become the first commandant of the modern Coast Guard in 1915. Gold was discovered in Canada's Klondike in 1896, bringing with it hundreds of thousands of prospectors, miners, and their followers to the coastal towns of Alaska. Gold discoveries in Nome, then in Fairbanks, Alaska, soon followed. This rapid migration to the Alaskan gold fields continued for more than ten years and brought with it the need for law enforcement, medical services, and humanitarian relief. In the Alaskan boomtowns of Nome and St. Michel, revenue cuttermen from the Bear and other cutters patrolled the streets, cared for the sick, and enforced the law where there had been none before. In addition, the Bear evacuated hundreds of invalids, criminals, and sick and desperate miners from the gold fields back to Seattle, where they received proper care. Bear also provided humanitarian relief to regions outside of A laska. For example, the cutter was laid up in San Francisco when the 1906 earthquake struck. In the quake's aftermath, Bear's men immediately set to work w ith relief efforts , using the cutter's steam launch to transport goods to the waterfront and working with local authorities in rescue efforts and law enforce-

ment. In an ironic twist, Bear personnel worked closely with US Army units then under the overall command of General Adolphus Greely. After rhe relief effort, President Theodore Roosevelt personally thanked the Revenue Cutter Service for its "prompt, gallant and efficient work." 9 During the Spanish-American War of 1898, US military leaders harbored a fear that Spanish privateers would terrorize the West Coast. Consequently, they h atched a plan to defend the coast using revenue cutters stationed out of California and Washington. This plan included armoring the Bear at the nearest navy yard, but the war ended before Bear had a chance to complete the Overland Relief Expedition, so there was no need to armor the cutter. During World War I, the US remained neutral through much of the war and faced few threats in the Pacific theater after it entered the conflict. Consequently, the Bear continued her usual Bering Sea Patrols as she h ad before the wa r. Bear served Alaska for forty-two years and thirty-four Bering Sea Patrols. During her career, the wh aling fleet had sailed out of the Arctic fogs into the mists of m emory and waves of miners had come and gone. As Alaskan settlements developed, civilizing influences once provided from the sea by Bear becam e locally available on land. Life in Alaska had grown similar to the rest of the country as new technology shortened travel times and communication between A laska and the lower forty-eight states. These improvements included modern aids to navigation and lighthouses, the telegraph, military bases, steel steamships, the submarine cable, reliable aircraft, and the radio. The vetera n revenue cutter had witnessed many changes in the north, and in 1927 President Calvin Coolidge officially signed Bear over to the City of Oakland to become a historic museum ship. The venerable Bear, however, was destined for greater glory. After her retirement by the Coast G uard and her brief career as a floating museum, Arctic explorer Richard Byrd re-activated the famous cutter. In 1928, he used Bear as one of two ships for his first Antarctic expedition in which he established the wellknown research base at Little America. He returned home in 1930 and used Bearon a second expedition in 1933. Byrd's voyages were the first American scientific missions to the Antarctic and resulted in advanced discoveries in weather, climate, and geography. In the m eantime, Bear still relied on her nineteenthcentury sail rig and coal-fired steam engine. Describing his trusted ice-ship, Byrd claimed: "There was a joy and spirit to the Bear's arrack ... She was built for the ice ... She could lower [her] head and bore in. Therein lay the merit of the honorable and ancient Bear." 10 In the late 1930s, President Franklin Roosevelt placed Rear Admiral Byrd in charge of the US Antarctic Service, and in 1939 Byrd employed Bear once again to reach his Antarctic base at Little America. Before this last cruise to the Antarctic, the Bear was given an overhaul to her original design: the engine was converted to diesel, rendering unnecessary the tall coalfired smoke stack. The stack was removed and the barquentine rig was altered to support a scout plane. By 1941, with war clouds forming on the horizon, Bear evacuated the scientific personnel stationed at the Antarctic bases and returned to the U nited States . 31