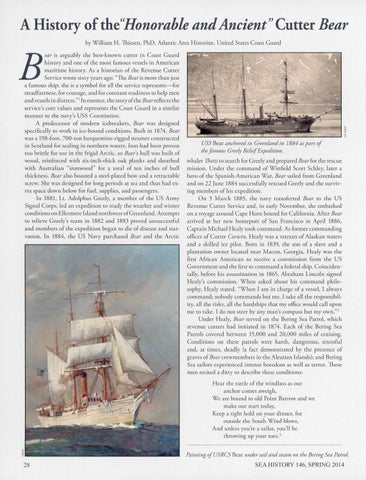 A History of the&quot;Honorable and Ancient&quot; Cutter Bear by William H . Thiesen, PhD, Atlamic Area Historian, United States Coast Guard ear is arguably the best-known cutter in Coast Guard history and one of the most famous vessels in American maritime history. As a historian of the Revenue Cutter Service wrote sixty years ago: &quot;The Bear is more than just a famous ship; she is a symbol for all the service represents-for steadfastness, for courage, and for constant readiness to help men and vessels in distress.&quot; 1 In essence, the story of the Bear reflects the service&#39;s core values and represents the Coast Guard in a similar manner to the navy&#39;s USS Constitution. A predecessor of modern icebreakers, Bear was designed specifically to work in ice-bound conditions. Built in 1874, Bear was a 198-foot, 700-ton barquentine-rigged steamer constructed in Scotland for sealing in northern waters. Iron had been proven too brittle for use in the frigid Arctic, so Bear&#39;s hull was built of wood, reinforced with six-inch-thick oak planks and sheathed with Australian &quot;ironwood&quot; for a total of ten inches of hull thickness. Bear also boasted a steel-plated bow and a retractable screw. She was designed for long periods at sea and thus had extra space down below for fuel, supplies, and passengers. In 1881, Lt. Adolphus Greely, a member of the US Army Signal Corps, led an expedition to study the weather and winter conditions on Ellesmere Island northwest of Greenland. Attempts to relieve Greely&#39;s team in 1882 and 1883 proved unsuccessful and members of the expedition began to die of disease and starvation. In 1884, the US Navy purchased Bear and the Arctic

USS Bear anchored in Greenland in 1884 as part of the famous Greely ReliefExpedition.

whaler Thetis to search for Greely and prepared Bear for the rescue mission. Under the command of Winfield Scott Schley, later a hero of the Spanish-American War, Bear sailed from Greenland and on 22 June 1884 successfully rescued Greely and the surviving members of his expedition. On 3 March 1885, the navy transferred Bear to the US Revenue Cutter Service and, in early November, she embarked on a voyage around Cape Horn bound for California. After Bear arrived at her new homeport of San Francisco in April 1886, Captain Michael Healy took command. As former commanding officer of Cutter Corwin, Healy was a veteran of Alaskan waters and a skilled ice pilot. Born in 1839, the son of a slave and a plantation owner located near Macon, Georgia, Healy was the first African American to receive a commission from the US Government and the first to command a federal ship. Coincidentally, before his assassination in 1865, Abraham Lincoln signed Healy&#39;s commission. When asked about his command philosophy, Healy stated, &quot;When I am in charge of a vessel, I always command; nobody commands but me. I take all the responsibility, all the risks, all the hardships that my office would call upon me to take. I do not steer by any man&#39;s compass but my own.&quot; 2 Under Healy, Bear served on the Bering Sea Patrol, which revenue cutters had initiated in 1874. Each of the Bering Sea Patrols covered between 15,000 and 20,000 miles of cruising. Conditions on these patrols were harsh, dangerous, stressful and, at times, deadly (a fact demonstrated by the presence of graves of Bearcrewmembers in the Aleutian Islands); and Bering Sea sailors experienced intense boredom as well as terror. These men recited a ditty to describe these conditions: Hear the rattle of the windlass as our anchor comes aweigh, We are bound to old Point Barrow and we make our start today, Keep a tight hold on your dinner, for outside the South Wind blows, And unless you&#39;re a sailor, you&#39;ll be throwing up your toes.3 Painting of USRCS Bear under sail and steam on the Bering Sea Patrol.