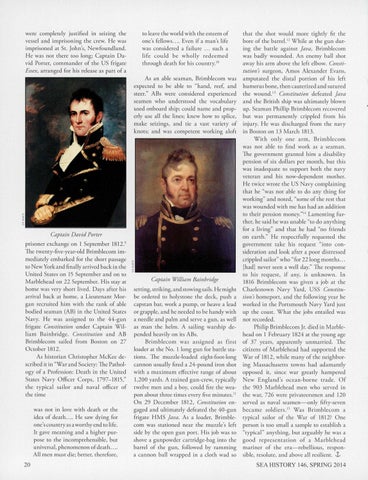 were completely justified in seizing the vessel and imprisoning the crew. He was imprisoned at St. John&#39;s, Newfoundland. He was not there too long; Captain David Porter, commander of the US frigate Essex, arranged for his release as part of a

to leave the world with the esteem of one&#39;s fellows .... Even if a man&#39;s life was considered a failure . . . such a life could be wholly redeemed through death for his country. 10

that the shot would more tightly fit the bore of the barrel. 12 While at the gun during the battle against Java, Brimblecom was badly wounded. An enemy ball shot away his arm above the left elbow. Constitution&#39;s surgeon, Amos Alexander Evans, As an able seaman, Brimblecom was amputated the distal portion of his left expected to be able to &quot;hand, reef, and humerus bone, then cauterized and sutured steer.&quot; ABs were considered experienced the wound. 13 Constitution defeated Java seamen who understood the vocabulary and the British ship was ultimately blown used onboard ship; could name and prop- up. Seaman Phillip Brimblecom recovered erly use all the lines; knew how to splice, but was permanently crippled from his make seizings, and tie a vast variety of injury. He was discharged from the navy knots; and was competent working aloft in Boston on 13 March 1813. With only one arm, Brimblecom was not able to find work as a seaman. The government granted him a disability pension of six dollars per month, but this was inadequate to support both the navy veteran and his now-dependent mother. He twice wrote the US Navy complaining that he &quot;was not able to do any thing for working&quot; and noted, &quot;some of the rest that was wounded with me has had an addition to their pension money.&quot; 14 Lamenting further, he said he was unable &quot;to do anything for a living&quot; and that he had &quot;no friends Captain David Porter on earth.&quot; He respectfully requested the prisoner exchange on 1 September 1812. 9 government take his request &quot;into conThe twenty-five-year-old Brimblecom imsideration and look after a poor distressed mediately embarked for the short passage , crippled sailor&quot; who &quot;for 22 long months ... ~ to New York and finally arrived back in the ~ [had] never seen a well day.&quot; The response United States on 15 September and on to to his request, if any, is unknown. In Captain William Bainbridge Marblehead on 22 September. His stay at 1816 Brimblecom was given a job at the home was very short lived. Days after his setting, striking, and stowing sails. He might Charlestown Navy Yard, USS Constituarrival back at home, a Lieutenant Mor- be ordered to holystone the deck, push a tion&#39;s homeport, and the following year he gan recruited him with the rank of able capstan bar, work a pump, or heave a lead worked in the Portsmouth Navy Yard just bodied seaman (AB) in the United States or grapple, and he needed to be handy with up the coast. What the jobs entailed was Navy. He was assigned to the 44-gun a needle and palm and serve a gun, as well not recorded. frigate Constitution under Captain Wil- as man the helm. A sailing warship dePhilip Brimblecom Jr. died in Marbleliam Bainbridge. Constitution and AB pended heavily on its ABs. head on 1 February 1824 at the young age Brimblecom sailed from Boston on 27 Brimblecom was assigned as first of 37 years, apparently unmarried. The October 1812. loader at the No. 1 long gun for battle sta- citizens of Marblehead had supported the As historian Christopher McKee de- tions. The muzzle-loaded eight-foot-long War of 1812, while many of the neighborscribed it in &quot;War and Society: The Pathol- cannon usually fired a 24-pound iron shot ing Massachusetts towns had adamantly ogy of a Profession: Death in the United with a maximum efrective range of about opposed it, since war greatly hampered States Navy Officer Corps, 1797-1815,&quot; 1,200 yards. A trained gun-crew, typically New England &#39;s ocean-borne trade. Of the typical sailor and naval officer of twelve men and a boy, could fire the wea- the 903 Marblehead men who served in the time pon about three times every five minutes. 11 the war, 726 were privateersmen and 120 On 29 December 1812, Constitution en- served as naval seamen-only fifty-seven was not in love with death or the gaged and ultimately defeated the 40-gun became soldiers. 15 Was Brimblecom a idea of death .... He saw dying for frigate HMS Java. As a loader, Brimble- typical sailor of the War of 1812? One one&#39;s country as a worthy end to life. com was stationed near the muzzle&#39;s left person is too small a sample to establish a It gave meaning and a higher purside by the open gun port. His job was to &quot;typical&quot; anything, but arguably he was a pose to the incomprehensible, but shove a gunpowder cartridge-bag into the good representation of a Marblehead universal, phenomenon of death .. .. barrel of the gun, followed by ramming mariner of the era-rebellious, responAll men must die; better, therefore, a cannon ball wrapped in a cloth wad so sible, resolute, and above all resilient. j:, 20