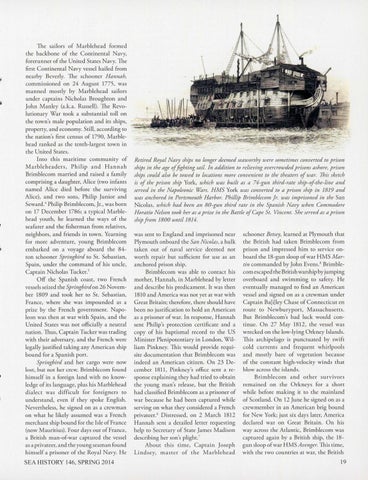 The sa ilors of Marblehead formed the backbone of the Conrinenral Navy, forerunner of the United States Navy. The first Continental Navy vessel h ailed from nearby Beverly. The schooner Hannah, commissioned on 24 Aug ust 1775, was manned mostly by Marblehead sai lors under captains Nicholas Broughton and John Manley (a.k.a. Russell). The Revolutionary War took a substantial toll on the town&#39;s male population and its ships, property, and economy. Still, according to the nation&#39;s first census of 1790, Marblehead ranked as the tenth-largest town in the United States. Into this maritime community of Retired Royal Navy ships no longer deemed seaworthy were sometimes converted to prison Marbleheaders, Philip and Hannah ships in the age offighting sail. In addition to relieving overcrowded prisons ashore, prison Brimblecom married and raised a fam ily ships could also be towed to locations more convenient to the theaters of war. This sketch comprising a daughter, Alice (two in fants is of the p rison ship York, which was built as a 74-gun third-rate ship-of the-line and named Alice died before the surviving served in the Napoleonic Wars. HMS York was converted to a prison ship in 1819 and Alice), and two sons, Philip Junior and was anchored in Portsmouth Harbor. Phillip Brimblecom Jr. was imprisoned in the San Seward. 4 Philip Brimblecom, Jr., was born Nicolas, which had been an 80-gun third rate in the Spanish Navy when Commodore on 17 December 1786; a typical Marble- Horatio Nelson took her as a prize in the Battle of Cape St. Vincent. She served as a prison head youth, he learned the ways of the ship from 1800 until 1814. seafarer and the fisherman from relatives, neighbors, and friends in town. Yearning was sent to England and imprisoned near schooner Betsey, learned at Plymouth that for more adventure, yo ung Brimblecom Plymouth onboard the San Nicolas, a hulk the British had taken Brimblecom from embarked on a voyage aboard the 84- taken out of naval service deemed not prison and impressed him to service onton schooner Springbird to St. Sebastian, worth repair but sufficient for use as an board the 18-gun sloop of war HMS MarSpain, under the command of his uncle, anchored prison sh ip. tin commanded by John Evens. 8 Brimble5 Brimblecom was able to contact his com escaped the British warship by jumping Captain Nicholas Tucker. Off the Spanish coast, two French mother, Hannah, in Marblehead by letter overboard and swimming to safety. He vessels seized the Springbird on 26 Novem- and describe his predicament. It was then eventually managed to find an American ber 1809 and took her to St. Sebastian, 1810 and America was not yet at war with vessel and signed on as a crewman under France, where she was impounded as a Great Britain; therefore, there should have Captain Ba[i]ley C hase of Connecticut en prize by the French government. Napo- been no justification to hold an American route to Newburyport, Massachusetts . leon was then at war with Spain, and the as a prisoner of war. In response, Hannah But Brimblecom&#39;s bad luck would conUnited States was not officially a neutral sent Philip&#39;s protection certificate and a tinue. On 27 May 1812, the vessel was nation. Thus, Captain Tucker was trading copy of his baptismal record to the US wrecked on the low-lying Orkney Islands. with their adversary, and the French were Minister Plenipotentiary in London, Wil- This archipelago is punctuated by swift legally justified taking any American ship liam Pinkney. This would provide requi- cold currents and frequent whirlpools site documentation that Brimblecom was and mostly bare of vegetation because bound for a Spanish port. Springbird and her cargo were now indeed an American citizen. On 23 De- of the constant high-velocity winds that lost, but not her crew. Brimblecom fo und cember 1811, Pinkney&#39;s office scnr a re- blow across the islands. Brimblecom and other survivors himself in a foreign land with no know- sponse explaining they had tried to obtain ledge of its lang uage, plus his Marblehead the young man&#39;s release, but the British remained on the Orkneys for a short dialect was difficult for foreigners to had classified Brimblecom as a prisoner of while before making it to the mainland understand, even if they spoke English. war because he had been captured while of Scotland. On 12 June he signed on as a Nevertheless, he signed on as a crewman serving on what they considered a French crewmember in an American brig bound on what he likely assumed was a French privateer. 6 Distressed, on 2 March 1812 for New York; just six days later, America merchant ship bound for the Isle of France Hannah sent a detailed letter requesting declared war on Great Britain. On his (now Mauritius). Four days out of France, help to Secretary of State James Madison way across the Atlantic, Brimblecom was captured again by a British ship, the 18a British man-of-war captured the vessel describing her son&#39;s plight. 7 gun sloop of war HMS Avenger. This time, as a privateer, and the young seaman found About this time, Captain Joseph himself a prisoner of the Royal Navy. He Lindsey, master of the Marb lehead with the two countries at war, the British