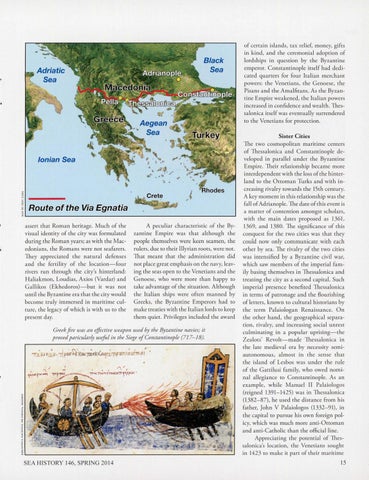 Route of the Via Egnatia assert that Roman heritage. Much of the visual identity of the city was formulated during the Roman yea rs; as with the Macedonians, the Romans were not seafarers . They appreciated the natural defenses and the fertility of the location-four rivers run through the city&#39;s hinterland: Haliakmon, Lo udias, Axios (Vardar) and Gallikos (Ekhedoros)-bur it was nor until the Byzantine era that the city would become truly immersed in maritime culture, the legacy of wh ich is with us to the present day.

A peculiar characteristic of rhe Byzantine Empire was that although the people themselves were keen seamen, the rulers, due to their Illyrian roots, were not. That meant that the administration did not place great emphasis on the navy, leaving the seas open to the Venetians and the Genoese, who were more than happy to rake advantage of the situation. Although the Italian ships were often manned by Greeks, the Byzantine Emperors had to make treaties with the Italian lords to keep them quiet. Privileges included the award

Greek fire was an effective weapon used by the Byzantine navies; it proved paricularly usefal in the Siege of Constantinople (717-18).

of certain islands, tax relief, money, gifts in kind, and the ceremonial adoption of lordships in question by the Byzantine emperor. Constantinople itself had dedicated quarters for fo ur Italian merchant powers: the Venetians, the Genoese, the Pisans and the Amalfirans . As the Byzantine Empire weakened, the Italian powers increased in confidence and wealth. Thessalonica itself was eventually surrendered to the Venetians for protection. Sister Cities The two cosmopolitan maritime centers of Thessalonica and Constantinople developed in parallel under the Byzantine Empire. Their relationship became more interdependent with the loss of the hinterland to the Ottoman Turks and with increasing rivalry towards the 15th century. A key moment in this relationship was the fall of Adrianople. The date of this event is a matter of contention amongst scholars, with the main dares proposed as 1361, 1369, and 1380. The significance of this conquest for the two cities was that they could now only communicate with each other by sea. The rivalry of the two cities was intensified by a Byzantine civil war, which saw members of the imperial family basing themselves in Thessalonica and treating the city as a second capital. Such imperial presence benefited Thessalonica in terms of patronage and the flourishing of letters, known to cultural historians by the term Palaiologan Renaissance. On the other hand, the geographical separation, rivalry, and increasing social unrest culminating in a popular uprising-the Zealots&#39; Revolt-made Thessalonica in the late medieval era by necessity semiautonomous, almost in the sense that the island of Lesbos was under the rule of the Garrilusi family, who owed nominal allegiance to Constantinople. As an example, while Manuel II Palaiologos (reigned 1391-1425) was in Thessalonica (1382-87), he used the distance from his father, John V Palaiologos (1332-91), in the capital to pursue h is own foreign policy, which was much more anti-Ottoman and anti-Catholic than the official line. Appreciating the potential of Thessalonica&#39;s location, the Venetians sought in 1423 to make it part of their maritime 15