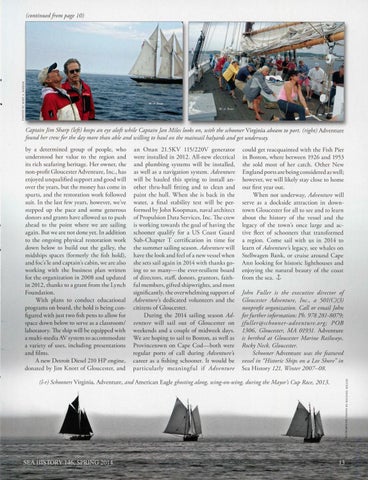 Captain Jim Sharp (left) keeps an eye aloft while Captain Jan Miles looks on, with the schooner Virginia abeam to port. (right) Adventure found her crew for the day more than able and willing to haul on the mainsail halyards and get underway by a determined group of people, who understood her value to the region and its rich seafaring heritage. Her owner, the non-profit Glouces ter Adventure, Inc., has enjoyed unqualified support and good will over the years, but the money has come in spurts, and the res toration work followed suit. In the las t few yea rs, howeve r, we&#39;ve stepped up the pace and som e generous donors and grants have allowed us to push ahead to the point where we are sailing again. But we are not done yet. In addition to the ongoing physical restoration work down below to build our the galley, the midships spaces (formerly the fish hold), and foc&#39;s&#39;le and captain&#39;s cabin, we a re also working with the business plan written for the organization in 2008 and updated in 2012 , thanks to a grant from the Lynch Foundation. With plans to conduct educational programs on board, the hold is being configured with just two fish pens to allow for space down below to serve as a classroom/ laboratory. The ship will be equipped w ith a multi-media AV system to accommodate a variety of uses, including presentations and films. A new Detroit Diesel 210 HP engine, donated by Jim Knott of Gloucester, and

an Onan 21.5KV l 15/220V generator were installed in 2012. All-new electrical and plumbing systems will be installed, as well as a navigation system. Adventure wi ll be hauled this spring to install another thru-hull fitting and to clean and paint the hull. When she is back in the wa ter, a final stability rest will be performe d by John Koopman, nava l architect of Propu lsion Data Services, Inc. The crew is working towards the goal of having the schooner qualify for a US Coast G uard Sub-Chapter T cenification in time for the summer sailing seaso n. Adventure will h ave the look and feel of a new vessel when she sets sail again in 2014 with thanks going to so many-the ever-resilient board of directors, staff, donors, granters, faithful members, gifted shipwrights, and most significantly, the overwhelming support of Adventure&#39;s dedicated volunteers and the citizens of Gloucester. During the 2014 sailing season Adventure will sail out of Gloucester on weekends and a couple of midweek days . We are hoping to sa il to Boston, as well as Provincetown on Cape Cod-both were regular ports of call during Adventure&#39;s career as a fishin g schooner. It would be particularly m ea ningful if Adventure

could get reacquainted with the Fish Pier in Boston, where betwee n 1926 and 1953 she sold most of her catch . Other New England ports are being considered as well; however, we will likely stay close to home our first year out. When not underway, Adventure will serve as a dockside attraction in downtown G loucester for all to see and to learn about the history of the vessel and the legacy of the town&#39;s once large and active fleet of schooners that transformed a region. Come sail with us in 2014 to learn of Adventure&#39;s legacy, see whales on Stellwagen Bank, or cruise around Cape Ann looking for historic lighthouses and enjoying the natural beauty of the coast from the sea. 1,