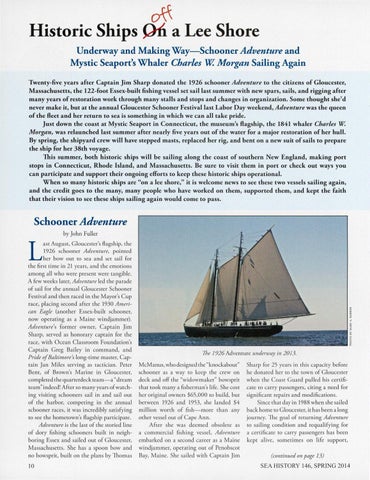 okk Historic Ships P11 a Lee Shore Underway and Making Way-Schooner Adventure and Mystic Seaport&#39;s Whaler Charles W. Morgan Sailing Again Twenty-five years after Captain Jim Sharp donated the 1926 schooner Adventure to the citizens of Gloucester, Massachusetts, the 122-foot Essex-built fishing vessel set sail last summer with new spars, sails, and rigging after many years of restoration work through many stalls and stops and changes in organization. Some thought she&#39;d never make it, but at the annual Gloucester Schooner Festival last Labor Day weekend, Adventure was the queen of the fleet and her return to sea is something in which we can all take pride. Just down the coast at Mystic Seaport in Connecticut, the museum&#39;s flagship, the 1841 whaler Charles W. Morgan, was relaunched last summer after nearly five years out of the water for a major restoration of her hull. By spring, the shipyard crew will have stepped masts, replaced her rig, and bent on a new suit of sails to prepare the ship for her 38th voyage. This summer, both historic ships will be sailing along the coast of southern New England, making port stops in Connecticut, Rhode Island, and Massachusetts. Be sure to visit them in port or check out ways you can participate and support their ongoing efforts to keep these historic ships operational. When so many historic ships are &quot;on a lee shore,&quot; it is welcome news to see these two vessels sailing again, and the credit goes to the many, many people who have worked on them, supported them, and kept the faith that their vision to see these ships sailing again would come to pass.

Schooner Adventure by John Fuller as t August, G lo ucester&#39;s flagship, the 1926 schooner Adventure, pointed her bow our to sea and set sail for the first rime in 21 yea rs, and the emotions among all who were present were tangible. A few weeks later, Adventure led the parade of sail fo r the annual G louces ter Schooner Fes tival and then raced in the M ayo r&#39;s C up race, placing second after the 1930 A merican Eagle (another Essex-built schooner, now operating as a M aine windjammer). Adventure&#39;s former ow ner, Captain Jim Sh arp, served as honorary captain fo r the race, w ith O cean C lass room Foundation&#39;s Captain G reg Bailey in command, and Pride ofBaltimore&#39;s long-time m as ter, Capta in Ja n Miles serving as tacticia n. Peter Bent, of Brown&#39;s Marine in G loucester, completed the quarterdeck ream-a &quot;dream team&quot; indeed! After so ma ny yea rs of wa tching visitin g schooners sail in a nd sail our of the harbor, competing in the annual schooner races, it was incredibly satisfying to see the hometown&#39;s flagship participate. Adventure is rhe las t of the storied line of dory fishi ng schooners built in neighboring Essex and sailed our of G loucester, M assachusetts. She has a spoon bow and no bowsprit, built on the plans by Thom as

The 1926 Adventure underway in 2013. McM anus, who designed the &quot;knockabout&quot; schooner as a way to keep the crew on deck and off the &quot;w idowmaker&quot; bowsprit that rook many a fi sherm a n&#39;s life . She cost her original owners $65,000 to build, but between 1926 and 1953, she landed $4 million worth of fis h-more than any other vessel our of Cape A nn. A fter she was deem ed obsolete as a commercial fis h ing vessel, Adventure embarked on a second career as a Maine wi ndjammer, operating out of Penobscot Bay, Maine. She sailed with Captain Jim

Shar p for 25 years in this capacity before he donated her ro the town of G loucester when the Coast G ua rd pulled his certificate to carry passengers, citing a need for significant repairs and modifications. Since that day in 1988 when she sailed back home to G loucester, it has been a long journey. The goal of returning Adventure to sailing condition and requalifying for a certifica te to carry passengers h as been kep t ali ve, som etimes on life support,