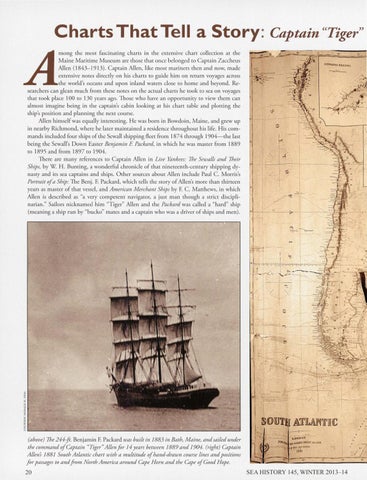 Charts That Tell a Story: Captain &quot;Tiger&quot; mong the most fasc inating charts in the extensive chart collection at the Maine Maritime Museum are those that once belonged to Captain Zaccheus Al len (1843-1913). Captain Allen, like most mariners th en and now, made extensive notes directly on his charts to guide him on return voyages across the world&#39;s oceans and upon inland waters close to home and beyond. Researchers can glean much from these notes on the actual charts he took to sea o n voyages that took place 100 to 130 years ago. Those who have an opportunity to view them can almost imagine being in the captain&#39;s cabin looking at his chart table and plotting the ship&#39;s positio n and planning the next course. Allen himself was equally interesting. He was born in Bowdoin, Maine, and grew up in nearby Richmond, where he later maintain ed a residence thro ughout his life. His commands included four ships of the Sewall shipping fleet from 1874 through 1904-the last being the Sewall &#39;s Down Easter Benjamin F Packard, in which he was master from 1889 to 1895 and from 1897 to 1904 . There are m any references to Captain Allen in Live Yankees: The Sewalls and Their Ships, by W H. Bunting, a wonderful chronicle of that nineteenth-century shipping dynasty and its sea captains and ships. Other sources about Allen include Paul C. Morris&#39;s Portrait ofa Ship: The Benj . F. Packard, which tells the story of Al len&#39;s more than thirteen years as master of that vessel, and American Merchant Ships by F. C. Matthews, in which Allen is described as &quot;a very competent navigator, a just man though a strict disciplinarian.&quot; Sailo rs nicknamed him &quot;Tiger&quot; Allen and the Packard was called a &quot;hard&quot; ship (meaning a ship run by &quot;bucko&quot; m ates and a captain who was a driver of ships and men).

(above) The 244~. Benjamin F. Packard was built in 1883 in Bath, Maine, and sailed under the command of Captain &quot;Tiger&quot; ALLen for 14 years between 1889 and 19 04. (righ t) Captain ALLen&#39;s 1881 South Atlantic chart with a multitude of hand-drawn course Lines and positions for passages to and from North America around Cape Ho rn and the Cape of Good Hope.