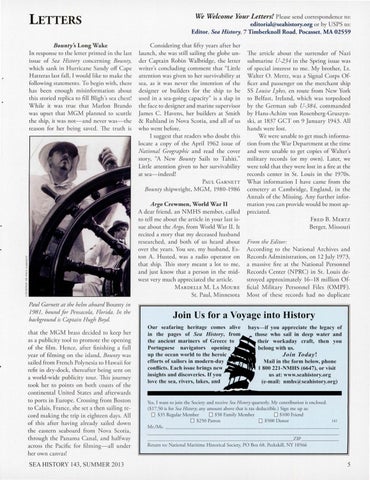 editorial@seahistory.org or by USPS to: Editor, Sea History, 7 Timberknoll Road, Pocasset, MA 02559 Considerin g that fifty years after her launch, she was still sailing rhe globe under Captai n Robin Walbridge, the lener wrirer&#39;s concluding comment that &quot;Little attention was g iven to her survivability at sea, as it was never the intention of the designer o r builders for the ship ro be used in a sea-going capacity&quot; is a slap in the face ro des igner and marine supervisor Jam es C. H avens, her builders at Smith &amp; Ruh land in Nova Scotia, and all of us who went before. I suggest that readers who doub t this locate a copy of the April 1962 issue of National Geographic a nd read rhe cover story, &#39;&#39;A New Bounty Sai ls ro Ta hiti .&quot; Lierle an ention given to her sur vivability at sea-indeed! PAUL GARNETT

Argo Crewmen , World War II A dear friend , a n NM H S member, called ro tell me abo ut rhe article in your last issue about rhe Argo, from World War II. Ir recited a story that my deceased husband researched , a nd borh of us hea rd abom over rhe yea rs. You see, my husband, Eston A. Husted, was a rad io o perator on rhat ship. This story mea nt a lot ro me, and jusr know that a person in the midwes r very much appreciated the article. MARDELLÂŁ M. LA MOU R E

Paul Garnett at the helm aboard Bouncy in 1981, bound fo r Pensacola, Florida. In the background is Captain Hugh Boyd. that the MGM brass decided to keep her as a publicity rool ro promore rhe opening of the film. H ence, after fini shing a full yea r of fi lming on the isla nd , Bounty was sailed from French Polynesia ro H awaii for refit in dry-dock, thereafter being sem on a world-wide publiciry tour. Th is journey rook her ro points on both coasts of the continental United States a nd afterwards to ports in Europe. Crossing from Boston ro Calais, France, she set a then sailing reco rd m aking the trip in eighteen days. All of this after h aving already sa iled down the eastern seaboard from Nova Scot ia, through the Pan am a Ca nal, and halfway across rhe Pacific for fi lming-a ll under her own canvas!

1 h e a rticle about the surrender of Nazi submarine U-234 in the Spring issue was of special interest ro me. My brother, Lt. Walter 0. Mertz, was a Signal Co rps Offi cer and passenger on the merchant ship SS Louise Lykes, en route from New York ro Belfast, Ireland , which was torpedoed by the G erman sub U-384, commanded by Hans-Achim von Rosenberg-G rus zynski , at 1837 GCT on 9 January 1943. All hands were lost. We were unable to get much information from the War D epartment at the time a nd were unable ro get copies of W alter&#39;s milita ry reco rds (o r my own). Later, we were rold that they were lost in a fire at the records center in St. Lo uis in the 1970s. What information I have ca me from the ce metery ar Cambridge, E ngland, in the A nnals of t he Missing. Any further inform ation yo u can provide wo uld be most appreciated. FRED B. M E RT Z Berger, M issouri

Join Us for a Voyage into History Our seafa rin g heritage comes alive in the pages of Sea Histo1y, from the ancient marin ers of Greece to Portugu ese navigators opening up the ocean world to the heroic efforts of sailors in modern-day conflicts. Each issue brings new insights and discove ries. If you love the sea, rivers, lakes, and

bays-if you appreciate the legacy of those who sa il in deep water and their workaday craft, then you belong with us.