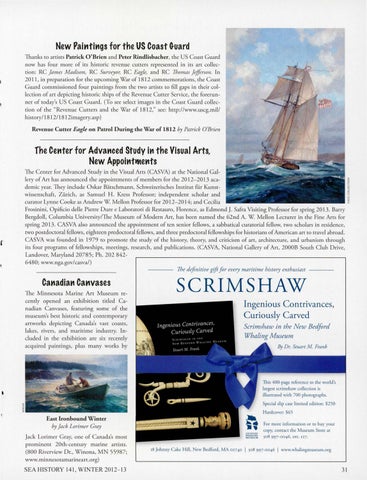 New Pait1tit1gs for the US Coast 0-uard Thanks to artists Patrick O &#39; Brien and Peter Rindlisbacher, the US Coast Guard now has four more of its historic revenue cutters represented in its art collection: RC James Madison, RC Surveyor, RC Eagle, and RC Thomas Jefferson. In 2011, in preparation for the upcoming War of 1812 commemorations, the Coast G uard commissioned four paintings from the rwo artists to fill gaps in their collection of art depicting historic ships of the Revenue C utter Service, the forerunner of today&#39;s US Coast Guard. (To see select images in the Coast G uard collection of the &quot;Revenue C utters and the War of 1812,&quot; see: http://www.uscg.mil/ history/ 18 12/ l 812imagery.asp)

Revenue Cutter Eagle on Patrol During the War of 1812 by Patrick O&#39;Brien