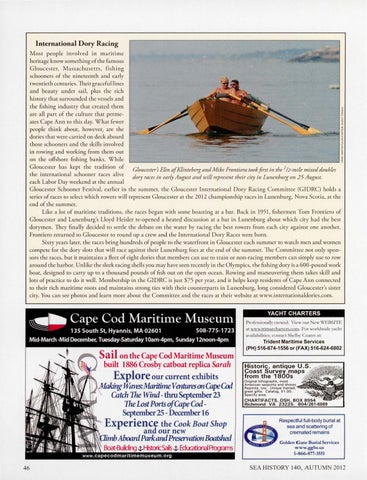 International Dory Racing M os t people involved in m ariti me heritage know something of the fa mous G lo uces ter, Ma ssachu setrs, fi sh ing schooners of the nineteenth and ea rly twentieth centuries. Their graceful Ii nes and beauty under sail, plus the rich history that surrounded the vessels a nd the fi shing industry that created them are all part of the culture that permeates Cape Ann to this day. W hat fewe r people think about, however, are the dories that were carried on deck aboard those schooners and the skills involved in rowing and working from them out on the offshore fishing banks. While G louces ter has kept the traditio n of Gloucester's Elin afKlinteberg and Mike Frontiera took first in the 112-mile m ixed doubles the international schooner races alive dory races in early August and will represent their city in Lunenburg on 25 August. each Labor D ay weekend at the a nnual G lo ucester Schooner Fes tival, ea rlier in the summer, the G loucester International D ory Racing Committee (GIDRC) holds a series of races to select which rowers will represent G loucester at the 201 2 championship races in Lunenburg, N ova Scotia, at the end of the summer. Like a lot of maritime traditions, the races began with some boasti ng at a bar. Back in 1951, fis hermen Tom Frontiero of G loucester a nd Lunenburg's Lloyd H eisler re-opened a heated discussion at a bar in Lunenburg about wh ich city had the best dorym en. They finally decided to settle the debate on the water by racing the best rowers from each city against one another. Frontiero re turned to Gloucester to ro und up a crew and the International D ory Races we re born. Sixty yea rs later, the races bring hund reds of people to the waterfront in Gloucester each summer to watch men and wom en co mpete for the dory slo ts that will race against their Lunenburg foes at the end of the summer. The Com m ittee not only sponsors the races, but it m aintains a fleet of eight dories that members can use to train or non-racing mem bers can simply use to row around the harbor. U nlike the sleek racing shells yo u may have seen recen tly in the Olympics, the fishing do ry is a 600 -pound work boat, designed to carry up to a thousand pounds of fis h out on the open ocean . Rowing and m a neuvering them rakes skill a nd lots of practice to do it well. Membership in the G IDRC is just $75 per year, and it helps keep residents of Cape Ann connected to their rich m aritime roots and m aintains strong ties with their counterparts in Lunenbu rg, long considered G loucester's sister city. You can see photos and learn more about the C ommittee and the races at their website at www.internationaldories.com . YACHT CHARTERS