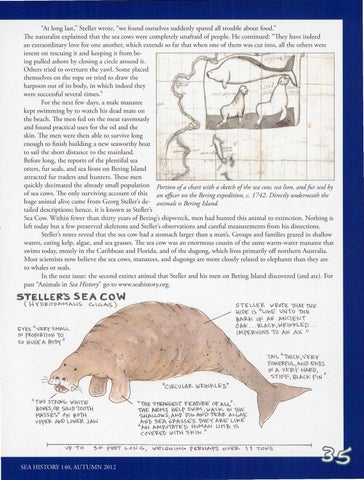 ''At long last," Steller wrote, "we found ourselves suddenly spared all trouble about food." The naturalist explained that the sea cows were completely unafraid of people. He continued: "They have indeed an extraordinary love for one another, which extends so far that when one of them was cut into, all the others were intent on rescuing it and keeping it from being pulled ashore by closing a circle around it. Others tried to overturn the yawl. Some placed themselves on the rope or tried to draw the harpoon out of its body, in which indeed they were successful several times." For the next few days, a male manatee kept swimming by to watch his dead mate on the beach. The men fed on the meat ravenously and found practical uses for the oil and the skin. The men were then able to survive long enough to finish building a new seaworthy boat to sail the short distance to the mainland. ;----f Before long, the reports of the plentiful sea otters, fur seals, and sea lions on Bering Island attracted fur traders and hunters. These men quickly decimated the already small population Portion ofa chart with a sketch ofthe sea cow, sea lion, and fur seal by of sea cows. The only surviving account of this an officer on the Bering expedition, c. 1742. Directly underneath the huge animal alive came from Georg Steller's de- animals is Bering Island. railed descriptions; hence, it is known as Sreller's Sea Cow. Within fewer than thirty years of Bering's shipwreck, men had hunted this animal to extinction. Nothing is left today but a few preserved skeletons and Steller's observations and careful measurements from his dissections. Sreller's notes reveal that the sea cow had a stomach larger than a man's. Groups and families grazed in shallow waters, eating kelp, algae, and sea grasses. The sea cow was an enormous cousin of the same warm-water manatee that swims today, mostly in the Caribbean and Florida, and of the dugong, which lives primarily off northern Australia. Most scientists now believe the sea cows, manatees, and dugongs are more closely related to elephants than they are to whales or seals. In the next issue: the second extinct animal that Steller and his men on Bering Island discovered (and ate). For past ''Animals in Sea History" go to www.seahisrory.org.