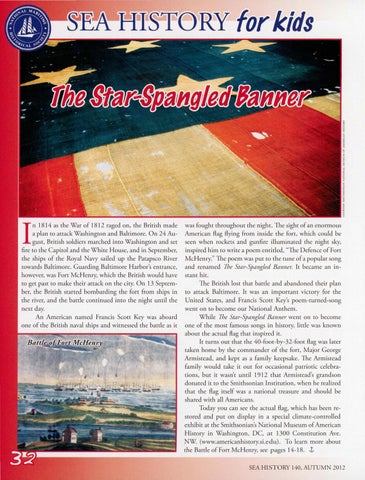 n 1814 as che War of 1812 raged on, che Bricish made a plan to attack Washington and Bahimore. On 24 Augusc, Bricish soldiers marched into Washington and sec fire to che Capitol and che Whice House, and in Sepcember, che ships of che Royal Navy sailed up che Pacapsco River towards Balcimore. Guarding Balcimore Harbor's entrance, however, was Fort McHenry, which che Bricish would have to gee pasc to make cheir attack on che cicy. On 13 September, the Bricish started bombarding the fort from ships in che river, and the battle continued into che night until the next day. An American named Francis Scott Key was aboard one of che Bricish naval ships and wi m essed the battle as ic

was foughc chroughout the night. The sight of an enormous American flag flying from inside the fore, which could be seen when rockecs and gunfire illuminated the night sky, inspired him to wrice a poem enti tled, "The Defence of Fort McHenry." The poem was put to the rnne of a popular song and renamed 1he Star-Spangled Banner. le became an instant hit. The British lost chac battle and abandoned cheir plan to attack Balcimore. le was an important victory for che United States, and Francis Scott Key's poem-turned-song went on to become our National Anthem. While 1he Star-Spangled Banner went on to become one of the most famous songs in history, little was known about the acrnal flag chac inspired it. le rnrns out that che 40-foot-by-32-fooc flag was lacer taken home by the commander of che fort, Major George Armistead, and kept as a family keepsake. The Armistead family would cake it out for occasional patriotic celebrations, but it wasn't until 1912 that Armistead's grandson donaced ic to che Smithsonian lnsticucion, when he realized thac the flag itself was a nacional creasure and should be shared wich all Americans. Today you can see the acrnal flag, which has been restored and put on display in a special climace-controlled exhibic at the Smichsonian's National Museum of American History in Washington, DC, at 1300 Constitution Ave. NW (www.americanhistory.si.e:du). To learn more about the Bacde of Fon McHenry, see pages 14-18. 1, SEA HISTORY 140, AUTUMN 2012