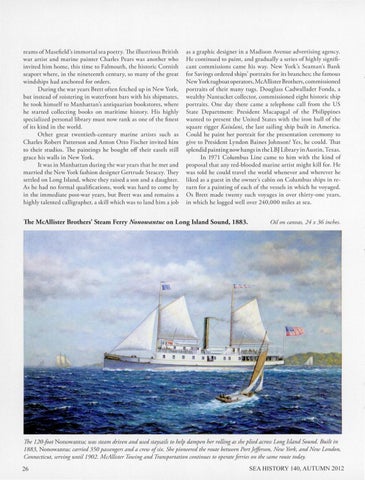 ream s of M asefield 's immortal sea poetry. The illustrious British wa r artist and m arine painter C ha rles Pears was a nother who invited him hom e, this time to Falmouth, the historic Cornish seaport where, in the nineteenth century, so m any of the great windships h ad anchored for orders. During the wa r years Brett often fetched up in N ew York, bu t instead of ro istering in waterfront bars with his shipmates, he took himself to Manhattan's antiquarian bookstores, where he started collecting books on m aritime history. His highly specialized personal library must now rank as one of the finest of its kind in the world. Other great t wentieth-century m arine ar tists such as C h a rles Robert Patterson and A nto n Otto Fischer invited him to their studios. The paintings he bough t off their easels still grace his walls in New York. It was in M anhattan during th e war yea rs that he m et and m a rried the New York fashion des igner Ge rtrude Steacey. They se ttled on Long Island, where they ra ised a son and a daughter. As he h ad no formal qualification s, wo rk was h ard to come by in the immediate post-wa r yea rs, but Brett was and rem ains a highly talented calligrapher, a skill whi ch was to land him a job

as a graphic designer in a M adison Avenue advertising age ncy. H e continued to paint, and gradually a series of highly signi ficant commissions cam e his way. N ew York's Seam an's Bank fo r Savings ordered ships' portraits for its bra nches; the fa m o us New York tugboat operators, M cAllister Brothers, commissioned portraits of their m any tugs. D ouglass Cadwall ader Fo nda, a wealthy Na ntucket collector, commi ss io ned eight historic ship portraits. O ne day there ca me a telephone call from the US State Department: President Macapagal of the Philip pines wa nted to present the U nited States w ith the iro n hull of the square rigger Kaiulani, the las t sa iling ship built in A merica. Could he paint her portrait fo r the presentation cerem o ny to give to Pres ident Lyndon Baines Johnson ? Yes, he could. Th at splendid painting now h angs in the LBJ Library in A ustin, Texas. In 197 1 C olumbus Line came to him w ith the kind of pro posal that any red-blooded ma rine a rtist might kill fo r. H e was told he could travel the wo rld whenever and wh erever he liked as a gues t in the owner's cabin on Columbus ships in rerurn for a painting of each of the vessels in w hich he voyaged. O s Brett m ade twenty such voyages in over t hirty-one yea rs, in which he logged well over 240,000 miles at sea.

The 12 0-Joot No nowanruc was steam driven and used staysails to help dampen her roLling as she p lied across Long Island Sound. Built in 1883, No nowantuc carried 350 passengers and a crew of six. She pioneered the route between Port Jefferson, New York, and New London, Connecticut, serving until 19 02 . McA Llister Towing and Transp ortation continues to op erate ferries on the same route today.