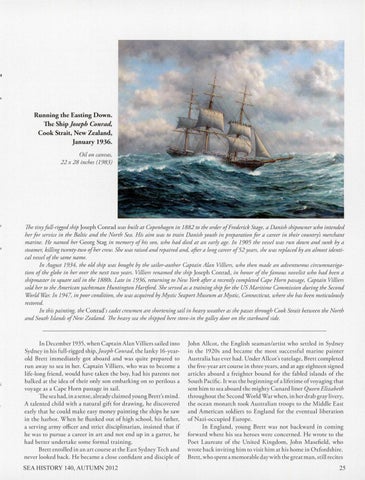 The tiny full-rigged ship Joseph Co nrad was built at Copenhagen in 1882 to the order ofFrederick Stage, a Danish shipowner who intended her for service in the Baltic and the North Sea. H is aim was to train Danish youth in preparation for a career in their country's merchant marine. H e named her Georg Stag in memory of his son, who had died at an early age. Jn 1905 the vessel was run down and sunk by a steamer, killing twenty-two ofher crew. She was raised and repaired and, after a long career of52 years, she was replaced by an almost identical vessel ofthe same name. In August 1934, the old ship was bought by the sailor-author Captain Alan Villiers, who then made an adventurous circumnavigation of the globe in her over the next two years. Villiers renamed the ship Joseph Conrad, in honor of the famous novelist who had been a shipmaster in square sail in the 1880s. Late in 1936, returning to New York after a recently comp leted Cape H orn passage, Captain Villiers sold her to the American yachtsman H untington H artford. She served as a training ship fo r the US Maritime Commission during the Second World ~r. In 1947, in poor condition, she was acquired by Mystic Seaport Museum at Mystic, Connecticut, where she has been meticulously restored. In this painting, the Conrad's cadet crewmen are shortening sail in heavy weather as she passes through Cook Strait between the No rth and South Islands ofNew Zealand. The heavy sea she shipped here stove-in the galley door on the starboard side.

In December 1935, when Captain A lan Villiers sa iled into Syd ney in his full-ri gged ship,]oseph Conrad, the la nky 16-yearold Brett immediately got aboard a nd was quite prepared to run away to sea in her. Captain Villiers, who was to beco me a life-lo ng fri end , would have taken the boy, had hi s pa rents not balked at th e idea of their only son emba rking on so perilo us a voyage as a C ape Horn passage in sail. 1 h e sea had , in a sense, already claimed yo ung Brett's mind . A talented child with a natural gift fo r drawing, he discovered ea rly that he could ma ke easy mo ney pai nting the sh ips he saw in t he harbo r. W hen he flun ked out of high school, his fa ther, a serving army offi cer and strict disciplinarian, insisted that if he was to pursue a career in art a nd not end up in a garret, he h ad better undertake some fo rm al ua in ing. Bret t enrolled in an art course at the East Sydney Tech a nd never looked back. He becam e a close confidant and disciple of

John A llcot, the English seam an/anise who settled in Syd ney in the 1920s and becam e the most successfu l m arine painter Ausualia has ever had . U nder A llcot's tutelage, Brett completed the fi ve-yea r a rt co urse in three yea rs, a nd at age eighteen signed a rticles aboard a freighter bo und fo r the fa bled islands of the South Pacific. It was the beginning of a lifetime of voyaging that sent him to sea aboard the mi ghty C una rd liner Q ueen Elizabeth throughout the Second W o rld War when, in her drab gray livery, the ocean monarch took Australia n t roo ps to the Middle East and Am erica n soldiers to England fo r the eventual liberation of Nazi-occupied Europe. In England, young Brett was not backward in coming fo rwa rd where hi s sea heroes were concerned . H e wrote to the Poet Laurea te of the Uni ted K ingdom , John M asefield , who wro te back inviting h im to visit him at hi s hom e in O xfordshire. Brett, who spent a m emorable day w ith the great m an, sti ll recites 25