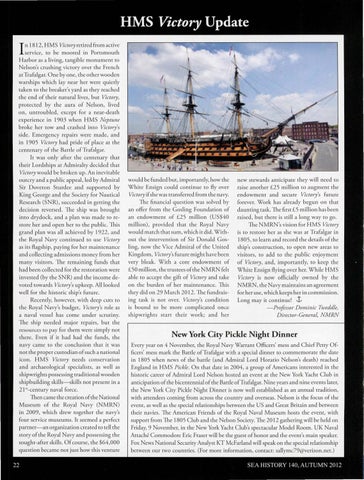 n 1812, HMS Victory retired from active service, to be moored in Portsmouth Harbor as a living, tangible monument to Nelson's crushing victory over the French at Trafalgar. One by one, the other wooden warships which lay near her were quietly taken to the breaker's yard as they reached the end of their natural lives, but Victory, protected by the aura of Nelso n, lived on, untroubled, except for a near-death experience in 1903 when HMS Neptune broke her row and crashed into Victory's side. Emergency repairs were made, and in 1905 Victory had pride of place at the centenary of the Battle ofTrafa lgar. It was o nly after the centenary that their Lordships at Admiralty decided that Victory would be broken up. An inevitable outcry and a public appeal, led by Admiral Sir Doveton Srurdee and supported by Ki ng George and the Society for Nautical Research (SNR), succeeded in getting the decision reversed. The ship was brought into drydock, and a plan was made to restore her and open her to the public. This grand plan was all achieved by 1922, and the Royal Navy continued to use Victory as its flagship, paying for her maintenance and collecting admissions money from her many visito rs. The remaining funds that had been collected for the restoration were invested (by the SNR) and the in come devoted towards Victory's upkeep. All looked well for the historic ship's future. Recently, however, with deep cuts to the Royal Navy's budget, Victory's role as a naval vessel has come under scrutiny. The ship needed major repairs, but the resources to pay for them were simply not there. Even if it had had the funds, the navy came to the conclusion that it was not the proper custodian of such a national icon. HMS Victory needs conservation and archaeological specialists, as well as shipwrights possessing traditional wooden ship building skills-skills not present in a 21 "-century naval force. Then came the creation of the National Museum of the Royal Navy (NMRN) in 2009, wh ich drew together the navy's four service museums. It seemed a perfect partner-an organization created to tell the story of the Royal Navy and possessing the sought-after skills. Of course, the $64,000 question became not just how this venture

would be funded but, importantly, how the White Ensign could continue to fly over Victory if she was transferred from the navy. The financial question was solved by an offer from the Gosling Foundation of an endowment of £25 m ill ion (US$40 million), provided that the Royal Navy would match that sum, whi ch it did. W ithout the intervention of Sir Donald Gosling, now the Vice Admiral of the United Kingdom, Victory's future might have been very bleak. With a core endowment of £50 million, the trustees of the NMRN felt able to accept the gift of Victory and take on the burden of her maintenance. This they did on 29 March 2012. The fundraising task is not over. Victory's condition is bound to be more complicated once shipwrights start their work; and her

new stewards anticipate they will need to raise another £25 million to augment the endowment and secure Victory's future forever. Work has already begun on that daunting task. The first £5 million has been raised, but there is still a long way to go. The NMRN's vision for HMS Victory is to restore her as she was at Trafalgar in 1805, to learn and record the details of the ship's construction , to open new areas to visitors, to add to the public enjoyment of Victory, and, importantly, to keep the White Ensign fl ying over her. While HMS Victory is now officially owned by the NMRN, the Navy main rains an agreement for her use, which keeps her in commission. Long may it continue! J, -Professor Dominic Tweddle, Director-General, NMRN

New York City Pickle Night Dinner Every year on 4 November, the Royal Navy Warrant Officers' mess and Chief Petty Officers' mess mark the Battle ofTrafalgar with a special dinner to commemorate the date in 1805 when news of the battle (and Admiral Lord Horatio Nelson's death) reached England in HMS Pickle. On that date in 2004, a group of Americans interested in the historic career of Admiral Lord Nelson hosted an event at the New York Yacht C lub in anticipation of the bicentennial of the Battle of Trafalgar. Nine years and nine events later, the New York City Pickle N ight Dinner is now well established as an annual tradition, with attendees coming from across the country and overseas. Nelson is the focus of the event, as well as the special relationships between the US and Great Britain and between their navies. The American Friends of the Royal Naval Museum hosts the event, with support from The 1805 C lub and the Nelson Society. The 2012 gathering will be held on Friday, 9 November, in the New York Yacht Club's spectacular Model Room. UK Naval Attache Commodore Eric Fraser will be the guest of honor and the event's main speaker. Fox News National Security Analyst KT McFarland will speak on the special relationship between our two countries. (For more information, contact: sallymc79@verizon.net.)