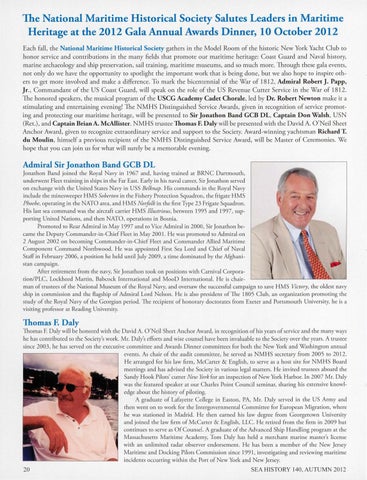 The National Maritime Historical Society Salutes Leaders in Maritime Heritage at the 2012 Gala Annual Awards Dinner, 10 October 2012 Each fall, the National Maritime Historical Society gathers in the Model Room of the historic New York Yacht Club to honor service and contributions in the many fields that promote our maritime heritage: Coast G uard and Naval history, marine archaeology and ship preservation, sail training, maritime museums, and so much more. Through these gala events, not only do we have the opportunity to spotlight the important work that is being done, but we also hope to inspire others to get more involved and make a difference. To mark the bicentennial of the War of 1812, Admiral Robert J. Papp, Jr., Commandant of the US Coast Guard, will speak on the role of the US Revenue Cutter Service in the War of 1812. The honored speakers, the musical program of the USCG Academy Cadet Chorale, led by Dr. Robert Newton make it a stimulating and entertaining evening! The NMHS Distinguished Service Awards, given in recognition of service promoting and protecting our maritime heritage, will be presented to Sir Jonathon Band GCB DL, Captain Don Walsh, USN (Ret.), and Captain Brian A. McAllister. NMHS trustee Thomas F. Daly will be presented with the David A. O 'Neil Sheet Anchor Award, given to recognize extraordinary service and support to the Society. Award-winning yachtsman Richard T. du Moulin, himself a previous recipient of the NMHS Distinguished Service Award, will be Master of Ceremonies. We hope that you can join us for what will surely be a memorable evening.

Admiral Sir Jonathon Band GCB DL Jonathon Band joined the Royal Navy in 1967 and, having trained at BRNC Dartmouth , underwent Fleet training in ships in the Far East. Early in his naval career, Sir Jonathon served on exchange with the United States Navy in USS Belknap. His commands in the Royal Navy include the minesweeper HMS Soberton in the Fishery Protection Squadron, the frigate HMS Phoebe, operating in the NATO area, and HMS Norfolk in the first Type 23 Frigate Squadron. His last sea command was the aircraft carrier HMS Illustrious, berween 1995 and 1997, supporting United Nations, and then NATO, operations in Bosnia. Promoted to Rear Admiral in May 1997 and to Vice Admiral in 2000, Sir Jonathon became the Deputy C ommander-in-Chief Fleet in May 2001. H e was promoted to Admiral on 2 August 2002 on becoming Co mmander-in-Chief Fleet and Commander Allied Maritime Co mponent Command Northwood. H e was appointed First Sea Lord and Chief of Naval Staff in February 2006, a position he held until July 2009, a time dominated by the Afghanistan campaign. After retirement from the navy, Sir Jonathon took on positions with Carnival Corporation/PLC, Lockheed Martin, Babcock International and MooD International. He is chairman of trustees of the National Museum of the Royal Navy, and oversaw the successful campaign to save HMS Victory, the oldest navy ship in commission and the flagship of Admiral Lord Nelson. H e is also president of The 1805 Club, an organization promoting the study of the Royal Navy of the Georgian period. The recipient of honorary doctorates from Exeter and Portsmouth University, he is a visiting professor at Reading University.

Thomas F. Daly 1homas F. D aly will be honored with the David A. O'Nei l Sheet Anchor Award, in recognition of his years of service and the many ways he has contributed to the Society's wo rk. Mr. Daly's efforts and wise counsel have been inval uable to the Society over the years. A trustee since 2003, he has served on the executive committee and Awards Dinner committees for both the New York and Washington annual events. As chair of the audit committee, he served as NMHS secretary from 2005 to 201 2. H e arranged for his law firm, McCarter & English, to serve as a host site for NMHS Board meetings and has advised the Society in various legal matters. H e invi ted trustees aboard the Sandy Hook Pilots' cutter New York for an inspection of New York Harbor. In 2007 Mr. Daly was the featured speaker at our Charles Point Council seminar, sharing his extensive knowledge about the history of piloting. A graduate of Lafayette College in Easton, PA, Mr. Daly served in the US Army and then went on to work for the Intergovernmental Co mmittee for European Migration, where he was stationed in Madrid. He then earned his law degree from Georgetown University and joined the law firm of McCarter & English, LLC. He retired from the firm in 2009 but continues to serve as Of Counsel. A graduate of the Advanced Ship Handling program at the Massachusetts M aritime Academy, Tom Daly has held a merchant marine master's license with an unlimited radar observer endorsement. H e has been a member of the New Jersey Maritime and Docking Pi lots Commission since 1991 , investigating and reviewing maritime incidents occurring within the Port of New York and New Jersey.