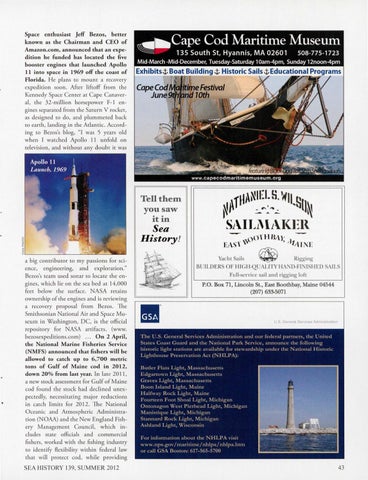 Space enthusiast Jeff Bezos, better known as the Chairman and CEO of Amazon.com, announced that an expedition he funded has located the five booster engines that launched Apollo 11 into space in 1969 off the coast of Florida. He plans to mount a recovery exped ition soon. After liftoff from the Kennedy Space Center at Cape Canaveral, the 32-mill ion horsepower F-1 engi nes separa ted from the Saturn V rocket, as designed to do, and plummeted back to earth , landing in the Atlantic. According to Bezos's blog, "I was 5 years old when I watched Apollo 11 unfold on television , and without any do ub t it was

Tell them you saw it in

a bi g co ntributor to my passions for science, engineering, and exploration." Bezos's team used sonar to locate the engines, which lie on the sea bed at 14,000 feet below the surface. NASA retains ownership of the engines and is reviewi ng a recovery proposal from Bezos. The Sm ithso nian National Air and Space Museum in Was hington, DC, is the official repository fo r NASA artifacts . (www. bezosexpeditions.com) . . . On 2 April, the National Marine Fisheries Service (NMFS) announced that fishers will be allowed to catch up to 6 ,7 00 metric tons of Gulf of Maine cod in 2012, down 20% from last year. In late 201 1, a new stock assessment for G ul f of Maine cod found the stock had declined unexpectedly, necessitating major reductions in catch limits for 2012. The National Oceanic and Atmospheric Administration (NOAA) and the New England Fishery Management Council, which includes state officials and co mmercial fishers, worked with the fishing industry to identify flexibility within fe d eral law that wi ll protect cod, while providing