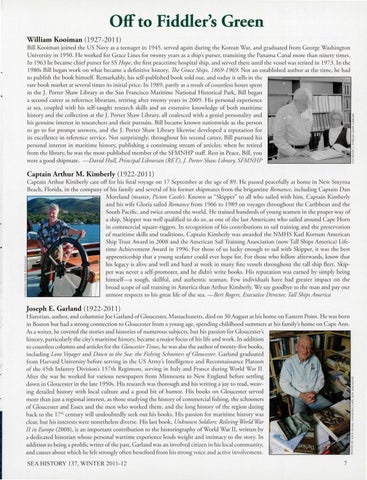 Off to Fiddler's Green William Kooiman (1927-2011) Bill Kooiman joined the US Navy as a teenager in 1945, served again during the Korean War, and grad uated from George Washington University in 1950. H e worked for Grace Lines for twenty years as a ship's purser, transiting the Panama Canal more than ninety rimes. In 1963 he became chief purser for SS Hope, rhe first peace ri me hospital ship, and served there until the vessel was retired in 1973. In the 1980s Bill began work on what became a defi nitive history, The Grace Ships, 1869-1969. Nor an established author at rhe rime, he had to publish the book himself. Remarkably, his self-published book sold our, and today it sells in the rare book marker at several rimes its initial price. In 1989, parrly as a result of counrless hours spent in rhe ]. Porter Shaw Library at the San Francisco Maritime National Historical Park, Bill began a second career as reference librarian, reti rin g after twenty years in 2009. His perso nal experience at sea, coupled with his self- taught research skills and an extensive knowledge of both maritime history and the collection at the J. Porter Shaw Library, all coalesced with a genial personality and his genuine interest in researchers and their pursuits. Bill became known nati o nwide as the person to go to fo r prompt answers, and rhe]. Porter Shaw Library likewise developed a reputatio n for its excellence in reference service. Nor surprisingly, througho ut his second career, Bill pursued his personal interest in maritim e histo ry, publishin g a continuing stream of articles; when he retired from the library, he was the most-published member of rhe SFMNHP staff. Rest in Peace, Bill, you were a good shipmate. -David Hull Principal Librarian {RET), J Porter Shaw Library, SFMNHP

Captain Arthur M. Kimberly (1922-2011) Captai n Arthur Kimberly cast off for his final voyage on 17 September at the age of 89. H e passed peacefu lly at home in New Sm yrna Beach, Florida, in the company of his fami ly and several of hi s former shipmates from the briga ntine Romance, including Captain Dan Moreland (m aster, Picton Castle). Known as "Skipper" ro all who sailed with him, Captain Kimberly and his wife G loria sailed Romance from 1966 ro 1989 on voyages throughout the Caribbean and the Sourh Pacific, and twice aro und the wo rld. He trained hundreds of yo ung seam en in the proper way of a ship. Skipper was well qualified ro do so, as one of the last Americans who sailed around Cape Horn in commercial square-riggers. In recognition of his co ntributions to sail training and the preservation of maritime ski lls and traditions, Captain Kimberly was awarded the NMHS Karl Kortum American Ship Trust Awa rd in 200 8 and the American Sail Training Association (now Tall Ships America) Lifetime Achievement Award in 1996. For those of us lucky eno ugh ro sail with Skipper, ir was the best apprenticeship rhar a yo ung seafarer could ever hope for. For those who follow afrerward s, know rhar his legacy is alive and well and hard at work in many fin e vessels throughout the tall ship fleet. Skipper was never a self-promoter, and he didn't write books. His reputation was earned by simply being himself-a rough, skillful, and authentic seaman. Few individuals have had greater impact on rhe broad scope of sail training in America than Arthur Kimberly. We say goodbye ro the m an and pay our utmost respects to his great life of the sea. -Bert Rogers, Executive Director, Tall Ships America

Joseph E. Garland (1922-2011) Historian, author, and columnist Joe Garland of G loucester, Massachusetts, died o n 30 August at his home o n Eastern Point. H e was born in Boston but had a strong connection ro Glo ucester from a yo ung age, spending childhood summers at his fami ly's hom e o n Cape Ann. As a writer, he covered the stories and histo ries of numerous subjects, bur his passion for G loucester's history, particularly the city's maritime history, becam e a major focus of his life and work. In addition ro counrl ess columns and articles for rhe Gloucester Times, he was also the author of twenty-five books, including Lone Voyager and D own to the Sea: the Fishing Schooners of Gloucester. Garland graduated from H arva rd University before serving in rhe US Army's Intelligence and Reconnaissa nce Platoon of rhe 45rh Infantry Divisio n's 157 rh Regiment, serving in Italy and France during World War II. After the war he wo rked for various newspapers from M inneso ta to New England before settling down in G loucester in rhe late 1950s. H is research was thoro ugh and his writing a joy ro read, weaving detailed history with local culture and a good bit of humor. His books on Gloucester served more than just a regional interest, as those studying rhe history of comm ercial fishing, the schooners of G loucester and Essex and the men who worked them, and the long histo ry of the regio n dating back to rhe 17'h century will undo ubtedl y seek our his books. His pass io n for maritime hi story was clear, bur his interests were nonetheless dive rse. His last book, Unknown Soldiers: Reliving World Ular II in Europe (2008), is an important co ntribution to the historiography of Wo rld War II, written by a dedicated historian whose perso nal wartime experience lends weight and intimacy to the story. In addition ro being a prolifi c writer of the past, Garland was an involved citizen in his local communi ty, and causes about which he felt strongly often benefited from his strong voice and active involvement.