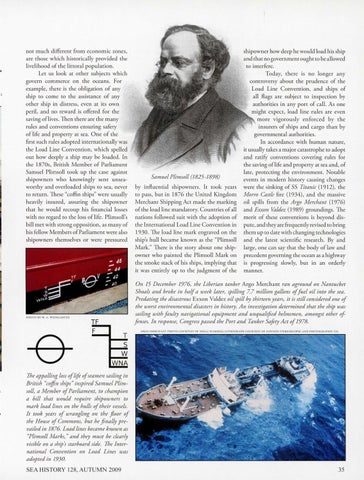 not much different from economic zones, are those which historically provided the livelihood of the littoral population. Let us look at other subjects which govern commerce on the oceans . For example, there is the obligation of any ship to come to the assistance of any other ship in distress, even at its own peril , and no reward is offered fo r the saving oflives. Then there are th e many rules and conventions ensuring safety of life and property at sea. One of the first such rules adopted internation ally was the Load Line Convention, which spelled out how deeply a ship may be loaded. In the 1870s, British Member of Parliament Samuel Plimsoll took up the case against shipowners who knowingly sent unseaworthy and overloaded ships to sea, never to return. These &quot;coffin ships&quot; were usually heavily insured, ass uring the shipowner that he wo uld recoup his fin an cial losses with no regard to the loss oflife. Plimsoll&#39;s bill met wi th strong opposition, as many of his fellow Members of Parliament were also shipowners themselves or were pressured

by influential shipowners. It took years to pass, but in 1876 the United Kingdom Merchant Shipping Act made the marking of the load line mandatory. Countries of all nations followed suit with the adoption of the International Load Line Convention in 1930. The load line mark engraved on the ship&#39;s hull became known as the &quot;Plimsoll Mark.&quot; There is the story about one shipowner who painted the Plimsoll Mark on the smoke stack of his ships, implying that it was entirely up to the judgment of the

On 15 D ecember 1976, the Liberian tanker Argo Merchant ran aground on Nantucleet Shoals and broke in half a week later, spilling 7 7 million gallons offuel oil into the sea. Predating the disastrous Exxon Valdez oil spill by thirteen years, it is still considered one of the worst environmental disasters in history. An investigation determined that the ship was sailing with fau lty navigational equipment and unqualified helmsmen, amongst other of Jenses. In response, Congress passed the Port and Tanker Safety Act of 1978.

shipowner how deep he wo uld load his ship and that no government ought to be allowed to interfere. Today, there is no longer any controversy about the prudence of the Load Line Convention, and ships of all fla gs are subject to inspection by authorities in any port of call. As one might expect, load line rules are even more vigorously enforced by the insurers of ships and cargo than by governmental authorities. In accordance with human nature, it usually takes a major catastrophe to adopt and ratify conventions covering rules for the saving oflife and property at sea and, of late, protecting the environment. Notable events in m odern history causing changes were the sinking of SS Titanic (1912), the Mo rro Castle fire (1934), and the m assive oil spills from the Argo Merchant (1976) and Exxon Valdez (1989) groundings. The m erit of these conventions is beyond dispute, and they are freq uen dy revised to bring them up to date with changing technologies and the latest scientific research. By and large, one can say that the body of law and precedent governing the ocean as a highway is progressing slowly, but in an orderly m anner.

The appalling loss oflife ofseamen sailing in British &quot;coffin ships&quot; inspired Samuel Plimsoll, a Member of Parliament, to champion a bill that would require shipowners to mark load lines on the hulls of their vessels. It took years of wrangling on the floor of the House of Commons, but he finally prevailed in 1876. Load lines became known as &quot;Plimsoll M arks,&quot; and they must be clearly visible on a ship&#39;s starboard side. The International Convention on Load Lines was adopted in 1930. SEA HISTORY 128, AUTUMN 2009