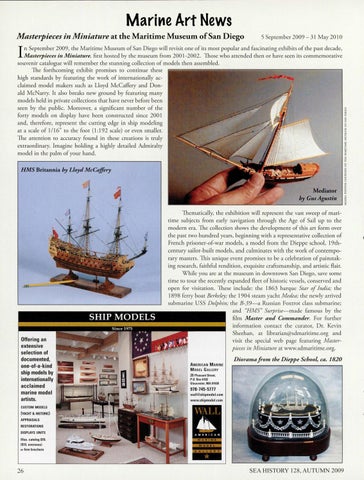 Masterpieces in Miniature at the Maritime Museum of San Diego

n September 2009, the Maritime Museum of San Diego will revisit one of its most popular and fascinating exhibits of the past decade,

Masterpieces in Miniature, first hosted by the museum from 2001-2002. Those who attended then or have seen its commemorative

souvenir catalogue will remember the stunning collection of models then assembled. The forthcoming exhibit promises to continue these high standards by featuring the work of internationally acclaimed model makers such as Lloyd McCaffery and Donald McNarry. It also breaks new ground by featuring many models held in private collections that have never before been seen by the public. Moreover, a significant number of the forty models on display have been constructed since 2001 and, therefore, represent the cutting edge in ship modeling at a scale of 1116&quot; to the foot (1: 192 scale) or even smaller. The attention to accuracy found in these creations is truly extraordinary. Imagine holding a highly detailed Admiralty model in the palm of your hand.

1hematically, the exhibi tion will represent the vast sweep of maritime subjects from early navigation through the Age of Sail up to the modern era. The collection shows the development of this art form over the past two hundred years, beginning with a representative collection of French prisoner-of-war models, a model from the D ieppe school, l 9thcentury sailor-built models, and culminates with the work of contemporary masters . This unique event promises to be a celebration of painstaking research , faithfu l rendition, exquisite craftsmanship, and artistic flair. While you are at the museum in downtown San Diego, save some time to tour the recently expanded fleet of historic vessels, conserved and open for visitation. These include: the 1863 barque Star of India; the 1898 ferry boat Berkeley; the 1904 steam yacht Medea; the newly arrived submarine USS Dolphin; the B-39-a Russian Foxtrot class submarine; and &quot;HMS&quot; Surprise-made famous by the film Master and Commander. For further information contact the curator, Dr. Kevin Sheehan, at librarian@sdmaritime.org and visit the special web page feat uring Masterpieces in Miniature at www.sdmaritime.org.