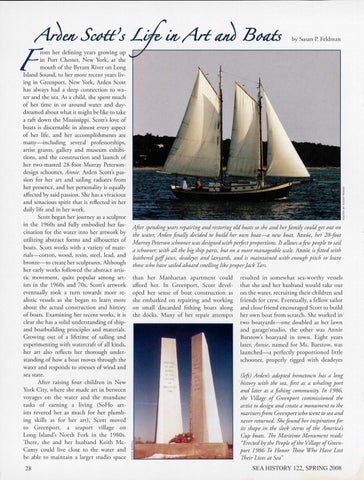 m her definin g years growing up n Port Chester, New York, at the mo uth of the Byram River on Long Island So und, to her mo re recent years living in Greenpo rt, New York, Arden Scott has always had a deep connection to water and the sea. As a child, she spent much of her time in or aro und water and daydream ed about what it might be like to take a raft down the M ississippi . Sco tt&#39;s love of boats is discernable in almost every aspect of her life, an d her accomplishments are m any-including several professorships, artist grants, gallery and museum exhibitions, and the constructio n and launch of her two-masted 28-foot M urray Petersondesign schooner, Annie. Arden Scott&#39;s passion fo r her art and sailing radiates from her presence, and her personality is equally affected by said pass io n. She has a vivacio us and tenacio us spirit that is reflected in her daily life and in her wo rk. Scott began her jo urney as a sculptor in the 1960s and fully embodied her fascinatio n fo r the water into her artwo rk by utilizing abstract fo rms and silhouettes of boats. Scott wo rks with a variety of materials-cotton, wood, resin, steel, lead, and bronze-to create her sculptures. Although her early wo rks fo llowed the abstract anistic movem ent, q uite popular am ong artists in the 1960s and 70s, Scott&#39;s artwo rk even tually took a turn towards more realistic vessels as she began to learn m ore about the actual construction and history of boats. Examining her recent works, it is clear she has a solid understanding of shipand boatbuilding principles and m aterials. Growing o ut of a life time of sailing and experimenting with watercraft of all kinds, her art also reflects her tho rough understanding of how a boat moves through the water and responds to stresses of wind and sea state. After raising four children in New York C ity, where she made art in between voyages on the wa ter and the mundane tasks of earning a living (So H o artists revered her as much for her plumbing skills as for h er art), Sco tt m oved to G reenport, a seapo rt village on Lo ng Island&#39;s North Fork in th e 198 0s. There, she and her husband Keith McCamy could live close to the wa ter and be able to m aintain a large r studio space

After spending years repairing and restoring old boats so she and her family could get out on the water, Arden finally decided to build her own boat-a new boat. Annie, her 28-Joot Murray Peterson schooner was designed with perfect proportions. It allows a Jew people to sail a schooner, with all the big ship parts, but on a more manageable scale. Annie is fitted with leathered gaffjaws, deadeyes and lanyards, and is maintained with enough pitch to leave those who have sailed aboard smelling Like proper j ack Tars.

than her Manhattan apartment co uld afford her. In G reenport, Scott developed h er sense of boat construction as she embarked on repairing and wo rki ng on small discarded fis hin g boats along th e docks. M any of her repair attemp ts

resulted in som ewhat sea-worthy vessels that she and her husband wo uld take o ut on the water, recruiting their child ren and fri ends fo r crew. Eventually, a fellow sailor and close fri end enco uraged Scott to build her own boat from scratch. She wo rked in two boatyards-o ne do ubled as her lawn and garage/s tudio, the other was Annie Barstow&#39;s boatyard in town . Eigh t years later, Annie, nam ed fo r Ms. Barstow, was launched-a perfec tly proportion ed little schoon er, pro perly rigged with deadeyes (Left) Arden&#39;s adopted hometown has a Long history with the sea, first as a whaling p ort and Later as a fishing community. In 1986, the Village of Greenport commissioned the artist to design and create a monument to the mariners.from Greenport who went to sea and never returned. She found her inspiration fo r its shape in the sleek sterns of the America&#39;s Cup boats. The Maritime Monument reads: &quot;Erected by the People ofthe Village of Greenport 1986 To H onor Those Who Have Lost Their Lives at Sea&quot;