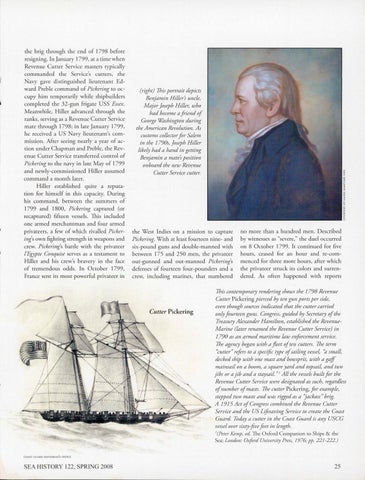 the brig through the end of 1798 before resigning. In January 1799, at a time when Revenue C utter Service mas ters typically commanded the Service's cutters, the Navy gave distinguished lieutenant Edward Preble co mmand of Pickering to occupy him temporarily while shipbuilders completed the 32-gun frigate USS Essex. Meanwhile, Hiller advan ced through the ranks, serving as a Revenue C utter Service mate through 1798; in late January 1799 , he received a US Navy lieutenant's commission. After seeing nearly a year of action under C hapman and Preble, the Revenue C utter Service transferred control of Pickering to the navy in late May of 1799 and n ewly-co mmissioned Hiller assumed command a month later. Hiller established quire a reputation for himself in this capacity. During his command, between the summers of 1799 and 1800, Pickering captured (o r recaptured) fifteen vessels. This included one armed merchantman and four armed privateers, a few of which rivalled Pickerings own fighting strength in weapons and crew. Pickering's battle with the priva teer l'Egypte Conquise serves as a testament to Hiller and his crew's bravery in the face of tremendous odds. In October 1799, France sent its most powerful privateer in

(right) This portrait depicts Benjamin Hiller's uncle, Major Joseph H iller, who had become a friend of George Washington during the American Revolution. As customs collector for Salem in the 1790s, Joseph Hiller likely had a hand in getting Benjamin a mate's position onboard the new Revenue Cutter Service cutter.

the West Indies on a mission to capture Pickering. With at least fourteen nine- and six-pound guns and double-manned with between 175 and 250 men, the privateer out-gunned and o ut-manned Pickerings defenses of fourteen four-pounders and a crew, including marines, that numbered

no more than a hundred men. Described by witnesses as "severe," the duel occurred on 8 October 1799. Ir continued for five hours, ceased for an hour and re-commenced for three more hours, after which the privateer struck its colo rs and surrendered. As often happened with reports

This contemporary rendering shows the 1798 Revenue Cutter Pickering pierced by ten gun ports per side, even though sources indicated that the cutter carried only fourteen guns. Congress, guided by Secretary ofthe Treasury Alexander H amilton, established the RevenueMarine (later renamed the Revenue Cutter Service) in 1790 as an armed maritime law enforcement service. The agency began with a fleet often cutters. The term "cutter" refers to a specific type ofsailing vessel 'asmall, decked ship with one mast and bowsprit, with a gaff mainsail on a boom, a square yard and top sail, and two jibs or a jib and a staysail. " 1 All the vessels built for the Revenue Cutter Service were designated as such, regardless of number of masts. The cutter Pickering, for example, stepped two masts and was rigged as a "jackass" brig. A 1915 Act of Congress combined the Revenue Cutter Service and the US Lifesaving Service to create the Coast Guard. Today a cutter in the Coast Guard is any USCG vessel over sixty-five feet in Length. 1 (Peter Kemp, ed. The Oxford Companion ro Ships & the Sea; London: Oxford University Press, 1976; pp. 221-222.)