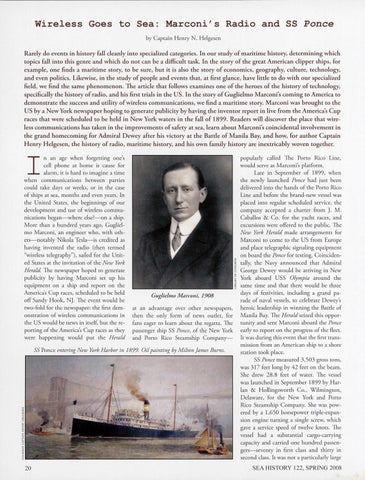 Rarely do events in history fall cleanly into specialized categories. In our study of maritime history, determining which topics fall into this genre and which do not can be a difficult task. In the story of the great American clipper ships, for example, one finds a maritime story, to be sure, but it is also the story of economics, geography, culture, technology, and even politics. Likewise, in the study of people and events that, at first glance, have little to do with our specialized field, we find the same phenomenon. The article that follows examines one of the heroes of the history of technology, specifically the history of radio, and his first trials in the US. In the story of Guglielmo Marconi's coming to America to demonstrate the success and utility of wireless communications, we find a maritime story. Marconi was brought to the US by a New York newspaper hoping to generate publicity by having the inventor report in live from the America's Cup races that were scheduled to be held in New York waters in the fall of 1899. Readers will discover the place that wireless communications has taken in the improvements of safety at sea, learn about Marconi's coincidental involvement in the grand homecoming for Admiral Dewey after his victory at the Battle of Manila Bay, and how, for author Captain Henry Helgesen, the history of radio, maritime history, and his own family history are inextricably woven together. n an age when forgetting one's cell phone at home is cause for alarm, it is hard to imagine a time when communications between parties co uld take days or weeks, or in the case of ships at sea, months and even years. In the United States, the beginnings of o ur development and use of wireless communications began-where else?-on a ship. M ore than a hundred years ago, G uglielmo M arconi , an engineer who, with others-notably N ikola Tesla-is credited as having invented the radio (then termed "wireless telegraphy"), sailed for the United States at the invitation of the New York H erald. The newspaper hoped to generate publicity by having M arconi set up his equipment on a ship and report on the America's Cup races, scheduled to be held off Sandy Hook, N J. The event wo uld be two-fold for the newspaper: the first dem onstration of wireless communications in the US would be news in itself, but the reporting of the America's Cup races as they were happening would put the H erald

Guglielmo Marconi, 1908 at an advantage over oth er newspapers, then the only form of news outlet, for fans eager to learn about the regatta. The passenger ship SS Ponce, of the New York and Porto Rico Steamship Company-

popularly called The Porto Rico Line, would serve as M arconi's platform. Late in September of 1899, when the newly launched Ponce had just been deli vered into the hands of the Porto Rico Line and before the brand-new vessel was placed into regular scheduled service, the company accepted a charter from J. M . Caballos & Co. for the yacht races, and excursions were offered to the public. The N ew Yo rk H erald m ade arrangements for Marconi to come to the US from Europe and place telegraphic signaling equipment on board the Po nce for testing. Coincidentally, the N avy announced that Admiral G eorge D ewey would be arriving in New York aboard USS Olymp ia around the sam e time and that there would be three days of festivities, including a grand parade of naval vessels, to celebrate Dewey's heroic leadership in winning the Battle of M anila Bay. The H erald seized this opportuni ty and sent M arconi aboard the Ponce early to report on the progress of the fleet. It was during thi s event that the first transmission from an American ship to a shore station took place. SS Ponce m easured 3,503 gross tons, was 3 17 feet lon g by 42 feet on the beam. She drew 28 .8 feet of water. The vessel was launched in September 1899 by Harlan & H ollingsworth C o., Wilmington, D elaware, for the N ew York and Porto Rico Steamship Company. She was powered by a 1,650 horsepower triple-expansion engine turning a single screw, which gave a service speed of twelve knots. The vessel had a substantial cargo-carrying capacity and carried one hundred passengers- seven ty in first class and thirty in second class. It was not a particularly large