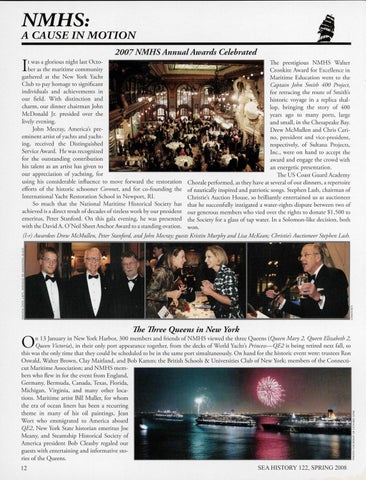 NMHS: A CAUSE IN MOTION 2007 NMHS Annual Awards Celebrated

t was a glorious night last October as the maritime community gathered at the New York Yacht C lub to pay homage to significant individuals and achievements in our field. With distinction and charm, our dinner chairman John McDonald Jr. presided over the lively evening. John Mecray, America's preeminent artist of yachts and yachting, received the Distinguished Service Award. He was recognized for the outstanding co ntribution his talent as an artist has given to our appreciation of yachting, for using his considerable influence to move forward the restoration efforts of the historic schoo ner Coronet, and for co-founding the International Yacht Restoration School in Newport, RI. So much that the National Maritime Historical Society has achieved is a direct result of decades of tireless work by our president emeritus, Peter Stanford. On this gala evening, he was presented with the David A. O'Neil Sheet Anchor Award to a standing ovation.

The prestigious NMHS Walter Cronkite Award for Excellence in Maritime Education went to the Captain john Smith 400 Project, for retracing the route of Smith's historic voyage in a replica shallop, bringing the story of 400 years ago to many ports, large and small, in the Chesapeake Bay. Drew McMullen and Chris Cerino, president and vice-president, respectively, of Sultana Projects, Inc., were on hand to accept the award and engage the crowd with an energetic presentation. The US Coast G uard Academy C horale performed, as they have at several of o ur dinners, a repertoire of nautically inspired and patriotic songs. Stephen Lash , chairman of C hristie's Auction House, so brilliantly entertained us as auctioneer that he successfully instigated a water-rights dispute between two of our genero us members who vied over the rights to donate $1,500 to the Society for a glass of tap water. In a Solomon-like decision, both won.

The Three Queens in New York n 13 January in New York Harbor, 300 members and friends ofNMHS viewed the three Queens (Queen Mary 2, Queen Elizabeth 2, Queen Victoria), in their only port appearance together, from the decks of World Yacht's Princess-QE2 is being retired next fall, so this was the only time that they could be scheduled to be in the same port si multaneously. On hand for the historic event were: trustees Ron Oswald, Walter Brown, C lay Maitland, and Bob Kamm; the British Schools & Universities Club of New York; members of the Connecticut Maritime Association; and NMHS members who flew in for the event from England, Germany, Bermuda, Canada, Texas, Florida, Michigan, Virginia, and many other locations . Maritime artist Bill Muller, for whom the era of ocean liners has been a recurring theme in many of his oil paintings, Jean Wort who emmigrated to America aboard QE2, New Yo rk State historian emeritus Joe Meany, and Steamship Historical Society of America president Bob Cleasby regaled our guests with entertaining and informative stories of the Queens.