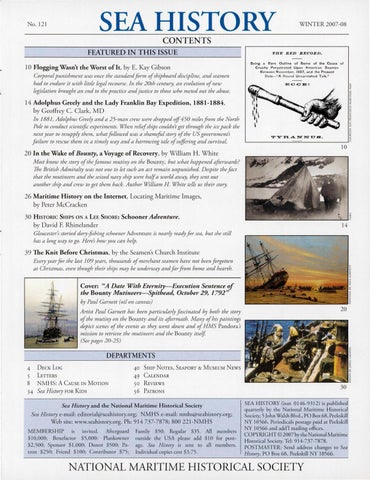 CONTENTS FEATURED IN THIS ISSUE

10 Flogging Wasn't the Worst of It, by E. Kay Gibson

Corporal punishment was once the standard farm ofshipboard discipline, and seamen had to endure it with little legal recourse. In the 20th century, an evolution of new legislation brought an end to the practice and justice to those who meted out the abuse.

14 Adolphus Greely and the Lady Franklin Bay Expedition, 1881-1884, by Geoffrey C. C lark, MD In 1881, Adolphus Greely and a 25-man crew were dropped off450 miles from the North Pole to conduct scientific experiments. When reliefships couldn't get through the ice pack the next year to resupply them, what fallowed was a shameful story ofthe US government's failure to rescue them in a timely way and a harrowing tale ofsuffering and survival. 10

20 In the Wake of Bounty, a Voyage of Recovery, by William H . White Most know the story ofthe famous mutiny on the Bounry, but what happened afterwards? The British Admiralty was not one to let such an act remain unpunished. Despite the fact that the mutineers and the seized navy ship were halfa world away, they sent out another ship and crew to get them back. Author William H. White tells us their story.

Gloucester's storied dory-fishing schooner Adve nrure is nearly ready far sea, but she still has a long way to go. Here's how you can help.

39 The Knit Before Christmas, by the Seamen's Ch urch Institute Every year far the last 109 years, thousands of merchant seamen have not been forgotten at Christmas, even though their ships may be underway and far from home and hearth.

Cover: "A Date With Eternity-Execution Sentence of the Bounty Mutineers-Spithead, October 29, 1792" by Paul Garnett (oil on canvas) 20

Artist Paul Garnett has been particularly fascinated by both the story of the mutiny on the Bounry and its aftermath. Many ofhis paintings depict scenes of the events as they went down and of HMS Pandora's mission to retrieve the mutineers and the Bounry itself (See pages 20-25)

NMHS: A CAUSE IN MOTION Sea History FOR Krns 34