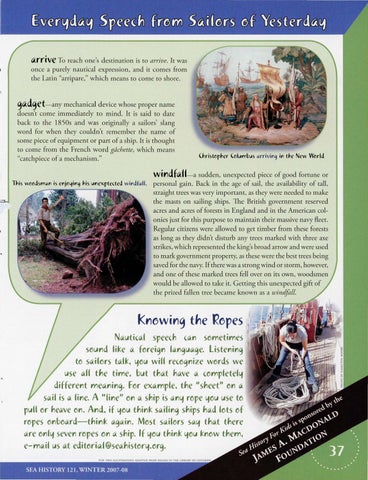 ~rrive To reach one's destination is to arrive. It was once a p urely nautical expression, and it comes from the Latin "arripare," which means to come to shore.

9~d9et-any mechanical device whose proper name doesn't come immediately to mind. It is said to date back to the 1850s and was originally a sailors' slang word for when they couldn't remember the name of some piece of equipment or part of a ship. lt is thought to come from the French word g!tchette, which m eans "catchpiece of a mechanism."

personal gain. Back in the age of sail, the availability of tall, straight trees was very important, as they were needed to make the masts on sailing ships. The British government reserved acres and acres of forests in England and in the American colonies just for this purpose to maintain their massive navy fleet. Regular citizens were allowed to get timber from these forests as long as they didn't disturb any trees marked with three axe strikes, which represented the king's broad arrow and were used to mark government property, as these were the best trees being saved for the navy. If there was a strong wind or storm, however, and one of these marked trees fell over on its own, woodsmen would be allowed to take it. Getting this unexpected gift of the prized fallen tree became known as a windfall.