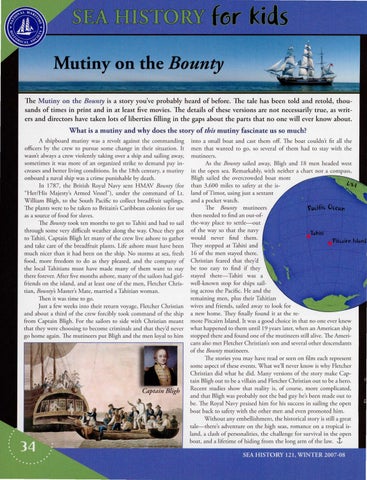 The Mutiny on the Bounty is a story you've probably h eard of before. The tale h as b een told and retold, thousands of times in print and in at least five m ovies. The details of these versions are n ot necessarily true, as writers and directors have taken lots of liberties filling in the gap s about the parts that no one will ever know about.

What is a mutiny and why does the story of this mutiny fascinate us so much? A shipboard mutiny was a revolt against the commanding officers by the crew to pursue some change in their situation. Ir wasn't always a crew violently raking over a ship and sailing away, sometimes it was more of an organized strike to deman d pay increases and better living conditions. In the 18 th century, a mutiny onboard a naval ship was a crime punishable by death . In 1787, the British Royal N avy sent H MAV Bounty (for "H er/ His M ajesty's Armed Vessel"), under the command of Lr. William Bligh, to the South Pacific to coll ect breadfrui t saplings . The plants were to be taken to Britain's C aribbean colonies fo r use as a source of foo d for slaves . The Bounty rook ten months to get to Tahiti and had to sail through some ve ry diffi cult weather along the way. Once they got to Tahiti, Captain Bligh let many of the crew live ashore to gather and rake care of the breadfr uit plants. Life as hore must have been much nicer than it had been on the ship. No storms at sea, fresh food, more freedom to do as they pleased, and th e company of the local Tahitians must have made many of them want to stay there forever. After five months ashore, man y of the sailors had girlfri ends on the island, and at least one of the m en, Fletcher Christian, Bounty's Master's Mate, married a Tahitian wo man . Then it was time to go. Just a few weeks into their return voyage, Fletcher Christian and abo ut a third of the crew forcibly rook command of the ship from Captai n Bligh . For the sailo rs to side with Christian meant char they were choosing to become criminals and that they'd never go home agai n . The mutineers put Bligh and the men loyal to him

into a small boat and cast chem off. The boat couldn't fir all the m en chat wanted to go, so several of them had to stay with the mutineers. As the Bounty sailed away, Bligh and 18 men headed west in the open sea. Remarkably, with neither a chart nor a compass, Bligh sailed the overcrowded boat m ore than 3,600 miles to safety at the island ofTimo r, using just a sextant and a pocket watch . The Bounty mutineers then needed to find an our-ofrhe-way place to settle-our of the way so that the navy would never find them . They stopped at Tahiti and 16 of the m en stayed there. C hristian feared that they'd be roo easy to find if they stayed there-Tahiti was a well-known stop for ships sailing across the Pacific. H e and the rem aining m en , plus their Tahitian wives and fri ends, sailed away to look for a new hom e. They final ly found it at the rem ote Pitca irn Island. Ir was a good choice in that no o ne ever knew what happened to them until 19 years later, when an American ship stopped there and found one of the m utineers still alive. The Americans also met Fletcher Christian's son and several other descendants of the Bounty mutineers. The stories you may have read or seen on film each represent som e aspect of these events. What we'll never kn ow is why Fletcher Christian did what he did. M any versions of the story make Captain Bligh out to be a villain and Fletcher Christian out to be a hero. Recent studies show chat reali ty is, of course, m ore complicated, and that Bligh was probably not the bad guy he's been m ade out to be. The Royal Navy praised him for his success in sailing the open boat back to safe ty with the other men and even promoted him. W ithout any embellishmem, th e historical story is still a great tale-there's adventure on the high seas, romance on a tropical island, a clash of personalities, th e challenge for survival in the open boar, and a lifetime of hiding from the long arm of the law. J,