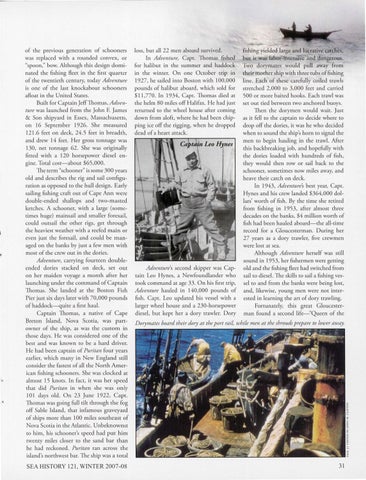 of the previous generation of schoon ers was replaced with a rounded convex, or "spoon," bow. Al though this design dominated the fishing Beet in the fi rs t quarter of the twentieth century, today Adventure is one of the las t knockabout schoon ers afloat in the United States. Built for Captain Jeff Thomas, Adventure was launched from the John F. Jam es & So n shipyard in Essex, M assachusetts, on 16 September 1926. Sh e measured 121.6 feet on deck, 24.5 fee t in breadth, and drew 14 feet. H er gross tonnage was 130, net tonnage 62. She was originally fi tted with a 120 horsepower diesel engine. Total cost-about $65 ,000 . The term "schooner" is some 300 years old and describes the rig and sail configuration as opposed to the hull design. Early sailing fis hing craft out of Cape An n were double-ended shallops and two- m asted ketches. A schooner, with a large (som etimes huge) mainsail and smaller foresai l, could outsail the other ri gs, get thro ugh the heaviest weather with a reefed m ain or even just the fo resail, and could be m anaged on the banks by just a few men w ith most of the crew out in the dories. Adventure, carrying fo urteen do ubleended dories stacked on deck, set o ut on her maiden voyage a month after her launching under the command of Captain Thomas. She landed at the Boston Fish Pier just six days later with 70,000 pounds of haddock- quite a firs t haul. Cap tain Thomas, a native of Cape Breton Island, Nova Sco tia, was p artowner of the ship, as was the cusrom in those days. H e was considered one of the best and was known to be a hard driver. H e had been captain of Puritan fo ur years earlier, which many in N ew England still consider the fastes t of all the No rth American fis hing schooners. She was clocked at almos t 15 knots. In fact, it was her sp eed that did Puritan in when she was only 10 1 days old. O n 23 June 1922, Capt. 1h omas was go ing full tilt through the fog off Sable Island, that infamous graveyard of ships more than 100 miles southeast of Nova Sco tia in the Atlantic. Unbeknownst to him, his schooner's speed had put him twenty miles closer to the sand bar than he had reckoned . Puritan ran across the island's northwes t bar. The ship was a rota! SEA HISTORY 12 1, WINTER 2007 -08

loss, but all 22 men aboard survived . In Adventure, Capt. Thomas fished for halibut in the summer and haddock in the winter. On one O ctober trip in 1927, he sailed into Boston with 100,000 pounds of halibut aboard, which sold for $1 1,770. In 1934, Capt. Thomas died at the helm 80 miles off H alifax. H e had just returned to the wheel house after coming down from aloft, where he had been chipping ice off the rigging, when he dropped dead of a heart attack.

A dventure's seco nd skipper was Captain Leo H ynes, a Newfo undlander who took command at age 33. On his first trip, Adventure hauled in 140,000 pounds of fish. Capt. Leo updated his vessel with a larger wheel house and a 230-horsepower diesel, but kept her a dory trawler. Dory

fishing yielded large and lucrative catches, but it was labor-intensive and dangerous. Two dorymates wo uld pull away from their mother ship with three tubs of fishing line. Each of these carefully coiled trawls stretched 2,000 to 3,000 feet and carried 500 or more bai ted hooks. Each trawl was set out tied between two anchored buoys. Then the dorymen wo uld wait. Just as it fell to the captain to decide where to d rop off the dories, it was h e who decided when to sound the ship's horn to signal the men to begin hauling in the trawl. After this backbreaking job, and hopefully with the dories loaded with hundreds of fish, they wo uld then row or sail back to the schooner, sometimes now miles away, and heave their catch on deck. In 1943, Adventure's best year, Capt. H ynes and his crew landed $364,000 dollars' wo rth of fish. By the time she retired from fishi ng in 1953, after almost three decades on the banks, $4 million worth of fish had been hauled aboard-the all-time record fo r a Gloucesterman. During her 27 years as a dory trawler, five crewmen were lost at sea. Although A dven ture herself was still sound in 1953, her fishermen were getting old and the fis hing Beet had switched from sail to diesel. The skills to sail a fishing vessel to and from the banks were being lost, and, likewise, young men were not interested in learning the art of dory trawling. Fortunately, this great Gloucesterman found a second life-"Queen of the

Dorymates board their dory at the port rail, while men at the shrouds prepare to lower away.