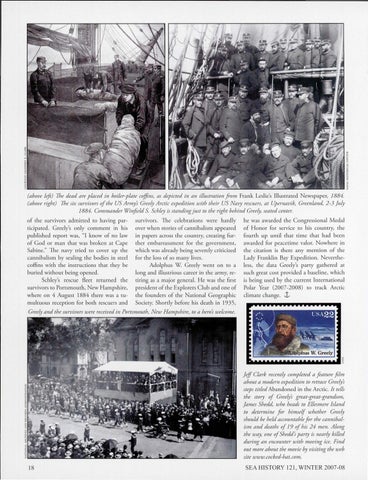 (above left) The dead are p laced in boiler-plate coffins, as depicted in an illustration from Frank Leslie's Illustrated Newspaper, 1884. (above right) The six survivors of the US Armys Greely Arctic expedition with their US Navy rescuers, at Upernavik, Greenland, 2-3 July 1884. Commander Winfield S. Schley is standing just to the right behind Greely, seated center. of the survivors admitted to having parricipared. Greely's only commenr in his published report was, "I kn ow of no law of God or man that was broken ar Cape Sabine." The navy tried to cover up rhe cannibalism by sealing rhe bodies in sreel coffins wirh rhe instructions rhar rhey be buried without being opened. Schley's rescue Beet returned the survivors to Portsmouth, New H ampshire, where on 4 August 1884 there was a tumultuous reception for both rescuers and

survivors. The celebrations were hardly over when stories of cannibalism appeared in papers across rhe country, creating furrher embarrassmenr for rhe governmenr, which was already being severely criticized for rhe loss of so many lives. Adolphus W Greely wenr on to a long and illustrious career in rhe army, retiring as a major general. H e was the first president of the Explorers C lub and one of the founders of the National Geographic Society. Shortly before his death in 1935,

he was awarded the C ongressional Medal of Honor for service to his country, the fourth up until rhat rime that had been awarded for peacetime valor. Nowhere in the citation is rhere any mention of rhe Lady Fra nklin Bay Expedition. Nevertheless, rhe data Greely's party gathered ar such great cos t provided a baseline, whi ch is being used by rhe current International Polar Year (2007-2008) to track Arctic climate change. -1

Greely and the survivors were received in Portsmouth, New Hampshire, to a heros welcome.

Jeff Clark recently completed a feature film about a modern expedition to retrace Greelys steps titled Abandoned in the Arctic. ft tells the story of Greelys great-great-grandson, James Shedd, who heads to Ellesmere Island to determine for himself whether Greely should be held accountable for the cannibalism and deaths of 19 of his 24 men. Along the way, one of Shedds party is nearly killed during an encounter with moving ice. Find out more about the movie by visiting the web site www.cocked-hat.com. 18