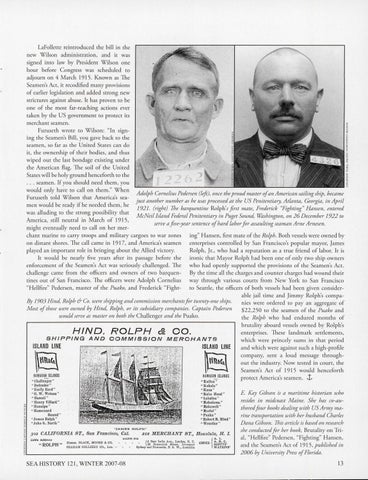 Lafollette reintroduced rhe bill in rhe new Wilson adminisrrarion, and ir was signed into law by President Wilson one hour before Congress was sched uled to adjourn on 4 March 1915. Known as The Seamen's Acr, ir recodified m any provisions of earlier legislation and added srrong new strictures against abuse. It has proven to be one of the most far-reaching actions ever taken by the US government to protect its merchant seamen. Furuseth wro te to Wilson: "In signing rhe Seamen's Bill, yo u gave back to the seamen, so far as the United Stares can do it, the ownership of rheir bodies, and rhus wiped our rhe las t bondage existing under the American flag. The soil of rhe United States will be holy ground henceforth to the ... seamen. If yo u should need them , yo u would only have to call on them." When Adolph Cornelius Pedersen (left), once the proud master ofan American sailing ship, became Furuseth told W ilson chat America's seajust another number as he was processed at the US Penitentiary, Atlanta, Georgia, in April m en wo uld be ready if he needed them, he 1921. (right) lhe barquentine Rolph's first mate, Frederick "Fighting" H ansen, entered was alluding to the strong possibiliry that McNeil Island Federal Penitentiary in Puget Sound, Washington, on 2 6 D ecember 1922 to America, still neutral in March of 1915 , serve a five-year sentence ofhard labor fo r assaulting seaman Arne A rnesen. might eventually need to call on her merchant m arine to carry uoops and military cargoes to war zones ing" H ansen, first mate of the Rolph. Both vessels were owned by on distant shores . The call came in 191 7, and America's seam en enterprises co ntrolled by San Francisco's popular m ayor, Jam es played an important role in bringing abo ut the Allied victory. Rolph, Jr. , who had a reputation as a true fri end of labor. Ir is It wo uld be nearly five years after irs passage before rhe ironi c thar Mayor Rolph had been one of only two ship owners enforcement of the Seamen's Act was seriously challenged. The who had openly supported rhe provisions of the Seamen's Act. challenge cam e from the officers and owners of two barquenBy the time all the charges and counter charges had wound their rines out of San Francisco. The officers were Adolph Cornelius way through vario us courrs from New York to San Francisco "Hellfire" Pedersen, mas ter of the Puako, and Frederick "Fightto Seattle, rhe officers of both vessels had been given considerable jail time and Jimmy Rolph's compaBy 1903 H ind, Rolph & Co. were shipping and commission merchants for twenty-one ships. nies were ordered to pay an aggregate of Most of those were owned by Hind, Rolph, or its subsidiary companies. Captain Pedersen $22,250 to the seamen of rhe Puako and would serve as master on both the Challenger and the Puako. the Rolph who had endured months of brutaliry aboard vessels owned by Rolph's HIND, ROLPH & 00. enterprises . These landmark settlements, SHIPPING AND COMMISSION MERCHANTS which were princely sums in that period ISLAND LINE ISLAllD WJE and whi ch we re against such a high-profile company, sent a lo ud m essage throughout the industry. Now tested in court, the Seamen's Act of 1915 wo uld henceforth HAWAIIAN ISLANDS HAWAIIAN ISLANDS protect America's seamen. 1, "Challenger"

E. Kay Gibson is a maritime historian who resides in midcoast Maine. She has co-authored four books dealing with US Army marine transportation with her husband Charles Dana Gibson. lhis article is based on research she conducted for her book, Brutaliry on Trial, "H ellfire" Pedersen, "Fighting" H ansen, and the Seamen's Act of 1915, published in 2 006 by University Press ofFlorida.