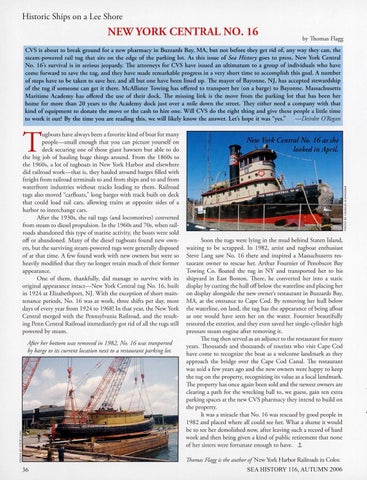 Historic Ships on a Lee Shore

by Thom as Flagg

CVS is about to break ground for a new pharmacy in Buzzards Bay, MA, but not before they get rid of, any way they can, the steam-powered rail tug that sits on the edge of the parking lot. As this issue of Sea History goes to press, New York Central No. 16's survival is in serious jeopardy. The attorneys for CVS have issued an ultimatum to a group of individuals who have come forward to save the tug, and they have made remarkable progress in a very short time to accomplish this goal. A number of steps have to be taken to save her, and all but one have been lined up. The mayor of Bayonne, NJ, has accepted stewardship of the tug if someone can get it there. McAllister Towing has offered to transport her (on a barge) to Bayonne. Massachusetts Maritime Academy has offered the use of their dock. The missing link is the move from the parking lot that has been her home for more than 20 years to the Academy dock just over a mile down the street. They either need a company with that kind of equipment to donate the move or the cash to hire one. Will CVS do the right thing and give these people a little time to work it out? By the time you are reading this, we will likely know the answer. Let's hope it was "yes." -Deirdre O'Regan

ugboats have always been a favorite kind of boat for many people-small enough that you can picture yourself on deck securing one of those giant hawsers but able to do the big job of hauling huge things around. From the 1860s to the 1960s, a lot of mgboats in New York Harbor and elsewhere did railroad work-that is, they hauled around barges filled with freight from railroad terminals to and from ships and to and from waterfront industries without tracks leading to them. Railroad tugs also moved "carBoats," long barges with track built on deck that could load rail cars, allowing trains at opposite sides of a harbor to interchange cars. After the 1930s, the rail tugs (and locomotives) converted from steam to diesel propulsion. In the 1960s and 70s, when railroads abandoned this type of marine activity, the boars were sold off or abandoned. Many of the diesel mgboars found new owners, bur the surviving steam-powered mgs were generally disposed of at that rime. A few found work with new owners but were so heavily modified that they no longer retain much of their former appearance. One of them, thankfully, did manage to survive with its original appearance intact-New York Central rug No. 16, built in 1924 at Elizabethport, NJ. With the exception of short maintenance periods, No. 16 was at work, three shifts per day, most days of every year from 1924 to 1968! In that year, the New York Central m erged with the Pennsylvania Railroad, and the resulting Penn Central Railroad immediately got rid of all the tugs still powered by steam. After her bottom was removed in 1982, No. 16 was tranported by barge to its current location next to a restaurant parking lot.

Soon the tugs were lying in the mud behind Staten Island, waiting to be scrapped. In 1982, artist and tugboat enthusiast Steve Lang saw No. 16 there and inspired a M assachusetts restaurant owner to rescue her. Arthur Fournier of Penobscot Bay Towing Co. Roared the tug in NY and transported her to his shipyard in East Boston. There, he converted her into a static display by cutting the hull off below the waterline and placing her on display alongside the new owner's restaurant in Buzzards Bay, MA, at the entrance to Cape Cod. By removing her hull below the waterline, on land, the rug has the appearance of being aBoat as one would have seen her on the water. Fournier beautifully restored the exterior, and they even saved her single-cylinder high pressure steam engine after removing it. The tug then served as an adjunct to the restaurant for many years. Thousands and thousands of tourists who visit Cape Cod have come to recognize the boat as a welcome landmark as they approach the bridge over the Cape Cod Canal. The restaurant was sold a few years ago and the new owners were happy to keep the rug on the property, recognizing its value as a local landmark. The property has once again been sold and the newest owners are clearing a path for the wrecking ball to, we guess, gain ten extra parking spaces at the new CVS pharmacy they intend to build on the property. It was a miracle that No. 16 was rescued by good people in 1982 and placed where all could see her. What a shame it would be to see her demolished now, after leaving such a record of hard work and then being given a kind of public retirement that none of her sisters were fortunate enough to have. ~ Thomas Flagg is the author of New York Harbor Railroads in Color.