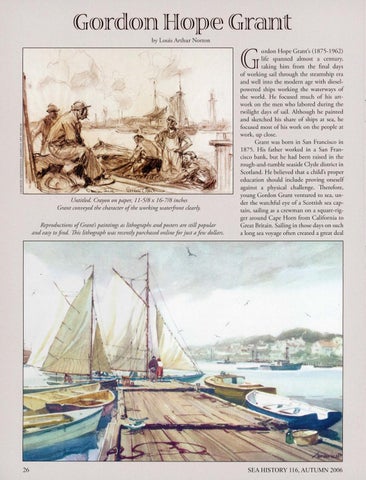 Untitled. Crayon on paper, 11-518 x 16-718 inches Grant conveyed the character ofthe working waterfront clearly. Reproductions of Grant's paintings as lithographs and posters are still popular and easy to find. This lithograph was recently purchased online for just a few dollars.

ordon Hope Grant's (1875- 1962) life spanned almost a century, taking him from the final days of working sail through the steamship era and well into the modern age with dieselpowered ships working the waterways of the world. H e focused much of his artwork on the men who labored during the rw ilight days of sail. Although he painted and sketched his share of ships at sea, he focused most of his wo rk on the people at work, up close. Grant was born in San Francisco in 1875. His father worked in a San Francisco bank, but he had been raised in the rough-and-tumble seaside Clyde district in Sco tland. He believed that a child's proper education should include proving oneself against a physical challenge. Therefore, yo ung Gordo n Grant ventured to sea, under the watchful eye of a Scottish sea captain, sailing as a crewman on a square-rigger aro und Cape Horn from California to Great Britain. Sailing in those days on such a long sea voyage often created a great deal