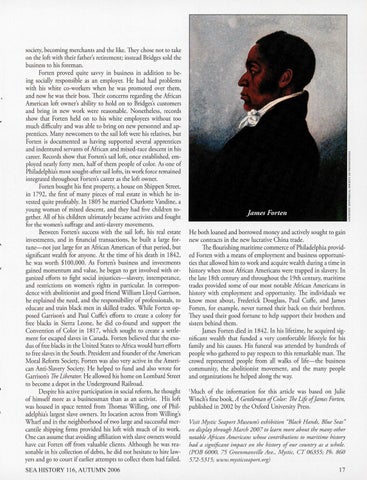 society, becoming merchants and the like. They chose not to take on the loft with their father's retirement; instead Bridges sold the business to his foreman. Forren proved quite savvy in business in addition to being socially responsible as an employer. He had had problems with his white co-workers when he was promoted over them, and now he was their boss. Their concerns regarding the African American loft owner's ability to hold on to Bridges's customers and bring in new work were reasonable. Nonetheless, records show that Forren held on to his white employees without too much difficulty and was able to bring on new personnel and apprentices. Many newcomers to the sail loft were his relatives, but Forren is documented as having supported several apprentices and indentured servants of African and mixed-race descent in his career. Reco rds show that Forten's sail loft, once established, employed nearly forty men, half of them people of color. As one of Philadelphia's most sought-after sail lofts, its work force remained integrated throughout Forten's career as the loft owner. Forren bought his first property, a house on Shippen Street, in 1792, the first of many pieces of real estate in which he invested quite profirably. In 1805 he married Charlotte Vandine, a yo ung woman of mixed descent, and they had five children together. All of his children ultimately became activists and fought for the women's suffrage and anti-slavery movements. Between Forten's success with the sail loft, his real estate investments, and in financial transactions, he built a large fortune-not just large for an African American of that period, but significant wealth for anyone. At the time of his death in 1842, he was worth $100,000. As Forten's business and investments gained momentum and value, he began to get involved with organized efforts to fight social injustices-slavery, intemperance, and restrictions on women's rights in particular. In correspondence with abolitionist and good friend William Lloyd Garrison, he explained the need, and the responsibility of professionals, to educate and train black men in skilled trades. While Forren opposed Garrison's and Paul Cuffe's efforts to create a colony for free blacks in Sierra Leone, he did co-found and support the Convention of Color in 181 7, which sought to create a settlement for escaped slaves in Canada. Forren believed that the exodus of free blacks in the United Stares to Africa would hurt efforts to free slaves in the South. President and founder of the American Moral Reform Society, Forren was also very active in the American Anti-Slavery Society. He helped to fund and also wrote for Garrison's The Liberator. He allowed his home on Lombard Street to become a depot in the Underground Railroad. Despite his active participation in social reform, he thought of himself more as a businessman than as an activist. His loft was housed in space rented from Thomas Willing, one of Philadelphia's largest slave owners. Its location across from Willing's Wharf and in the neighborhood of two large and successful mercantile shipping firms provided his loft with much of its work. One can ass ume that avoiding affiliation with slave owners would have cur Forren off from valuable clients. Although he was reasonable in his collection of debts, he did not hesitate to hire lawyers and go to court if earlier attempts to collect them had failed.

H e both loaned and borrowed money and actively sought to gain new contracts in the new lucrative China trade. The flourishing maritime commerce of Philadelphia provided Forren with a means of employment and business opportunities that allowed him to work and acquire wealth during a time in history when most African Americans were trapped in slavery. In the late 18th century and throughout the 19th century, maritime trades provided some of our most notable African Americans in history with employment and opportunity. The individuals we know most about, Frederick Douglass, Paul Cuffe, and James Forren, for example, never turned their back on their brethren. They used their good fortune to help support their brothers and sisters behind them. James Forren died in 1842. In his lifetime, he acquired significant wealth that funded a very comfortable lifestyle for his family and his causes. His funeral was attended by hundreds of people who gathered to pay respects to this remarkable man. The crowd represented people from all walks of life-the business community, the abolitionist movement, and the many people and organizations he helped along the way. 1

M uch of the information for this article was based on Julie Winch's fine book, A Gentleman of Color: The Life offames Porten, published in 2002 by the Oxford University Press. Visit Mystic Seaport Museum's exhibition "Black Hands, Blue Seas" on display through March 2007 to learn more about the many other notable African Americans whose contributions to maritime history had a significant impact on the history of our country as a whole. (POB 6000, 75 Greenmanville Ave., Mystic, CT 06355; Ph. 860 572-5315; www.mysticseaport.org)