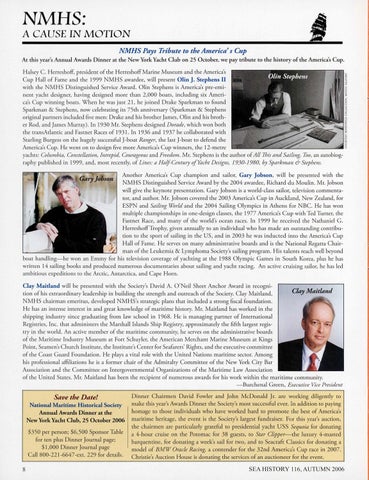 NMHS: A CAUSE IN MOTION NMHS Pays Tribute to the America's Cup

At this year's Annual Awards Dinner at the New York Yacht Club on 25 October, we pay tribute to the history of the America's Cup. Halsey C. H erreshoff, president of the H erreshoffMarine Museum and the America's C up Hall of Fame and the 1999 N MHS awardee, will present Olin J. Stephens II with the NMH S Distinguished Service Award. Olin Stephens is America's pre-em inent yacht designer, having designed more than 2,000 boats, including six America's Cup winning boats. When h e was just 21 , he joined Drake Sparkman to found Sparkman & Stephens, now celebrating its 75th anniversary (Sparkman & Stephens original partners included five men: Drake and his brother James, O lin and his brother Rod, and James Murray). In 1930 Mr. Stephens designed Dorade, which won both the transAtlantic and Fastnet Races of 193 1. In 1936 and 1937 he coll aborated with Starling Burgess on the hugely successful ]-boat Ranger, the las t }boat to defend the America's Cup. H e went on to design five more America's C up winners, the 12-metre yachts: Columbia, Constellation, Intrepid, Courageous and Freedom . Mr. Stephens is the author of All This and Sailing, Too, an autob iography published in 1999, and, most recently, of Lines: a H alf-Century oJYacht Designs, 1930-1980, by Sparkman & Stephens. Another America's Cup champion and sailor, Gary Jobson, will be presented with the N MHS Distinguished Service Award by the 2004 awardee, Richard du M oulin. Mr. Jobson will give the keynote presentation. Gary Jobson is a wo rld-class sailor, television commentator, and author. Mr. Jobso n covered the 2003 America's C up in Auckland, New Zealand, for ESPN and Sailing World and the 2004 Sailing Olympics in Athens fo r N BC. He has won multiple championships in one-design classes, the 1977 America's C up with Ted Turner, the Fastnet Race, and many of the wo rld's ocean races. In 1999 he received the Nathaniel G. H erreshoffTrophy, given annually to an individual wh o has made an outstanding contribution to the sport of sailing in the US, and in 2003 he was inducted into the America's C up H all of Fame. H e serves on many administrative boards and is the N ational Regatta Chairman of the Leukemia & Lymphoma Society's sailing program . His talents reach well beyond boat handling-he won an Emmy fo r his television coverage of yachting at the 1988 O lympic Games in South Korea, plus he has wri tten 14 sailing books and produced numerous documentaries about sailing and yach t raci ng. An active cruising sailor, he has led ambitious expeditions to the Arctic, Antarctica, and Cape H orn . Clay Maitland will be presented with the Society's David A. O 'Neil Sheet Anchor Award in recognition of his extraordinary leadership in building the strength and outreach of the Society. Clay M aitland, Clay Maitland N MHS chairman emeritus, developed NMH S's strategic plans that included a stro ng fiscal fo undation. H e has an intense interest in and great knowledge of maritime history. Mr. Maitland has wo rked in the shipping industry since graduating from law school in 1968 . He is managing partner of International Registries, Inc. that administers the Marshall Islands Ship Registry, approximately the fifth largest registry in the wo rld. An active member of the maritime community, he serves on the administrative boards of the Mari tim e Industry M useum at Fort Schuyler, the American Merchant Marine Museum at Kings Point, Seamen's Church Institute, the Institute's Center for Seafarers' Rights, and the executive committee of the Coast G uard Fo undation. H e plays a vital role with the United Nations maritime sector. Among his professional affili ations he is a fo rmer chair of the Admiralty Committee of the New York C ity Bar Association and the Committee on Intergovernmental O rganizations of the Maritime Law Association of the United States . Mr. Maitland has been the recipient of numero us awards for his work within the maritime community. - Burchenal Green , Executive Vice President

Dinner Chairmen D avid Fowler and John McDonald Jr. are working diligently to make this yea r's Awards Dinner the Society's most successful ever. In addition to paying homage to those individuals who have worked hard to promote the best of America's maritime heritage, the event is the Society's largest fundraiser. For this year's auction, the chairmen are particularly grateful to presidential yacht USS Sequoia for donating a 4-hour cruise on the Potomac for 38 guests, to Star Clipper-the luxury 4-mas ted barquentine, for donating a week's sail for two, and to Seacraft C lassics for donating a model of BMW Oracle Racing, a contender for the 32nd America's Cup race in 2007 . Ch ristie's Auction House is donating the services of an auctioneer for the event. SEA HISTORY 116, AUTUMN 2006